This artist's concept depicts the rover Curiosity as it uses its ChemCam instrument to investigate the composition of a rock surface. (©NASA/JPL-Caltech) 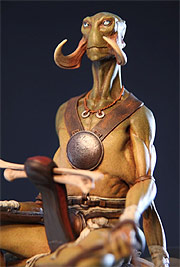 (WORLDNOW) -- NASA has landed its Curiosity rover on Mars to document and study the Red Planet. Photos and tweets are already coming to Earth as the rover studies Mars looking for signs of any life that may have once lived there. If we're lucky dry river beds and rocks holding traces of water will be all Curiosity finds.

Over the past hundred years many writers, artists and directors have thought about what life on Mars might be like, and what any native life forms might be like. More often than not, these fictional Martians have been less than friendly to us Earthlings.

With this tradition of malignant Martians in mind, here is a list of 12 things that Curiosity will hopefully not find on Mars:

1. Decepticons -- In Michael Bay's Transformers movies, NASA sends a rover to Mars that "disappears" due to a "malfunction." That "malfunction" turns out to be a giant robot from outer space that finds the rover and destroys it on its way to Earth to wreck havoc. While it would be good to have Optimus Prime protecting Earth and teaching us the benign aspects of the Transformers' culture, the amount of lives lost due to the Decepticon attacks wouldn't be worth it.

2. H. G. Wells' Martian invaders -- In The War of the Worlds Martians come to Earth looking to wipe humanity off the planet. This was one of the first stories to posit Martians as a violent and evil people, and sadly that stereotype has stuck.

3. Tharks and Therns -- The Mars that John Carter visits in Edgar Rice Burroughs' books, and in the recent Disney movie based on them, is full of alien races battling one another for control of the planet… a battle that we should not get involved in.

4. Marvin the Martian -- Yes he's cute, but he has violent tendencies, so it would be best to leave him, and his lasers, alone.

6. Dr. Manhattan's Mars hideout -- Should Curiosity stumble upon the home of this demigod then New York may be on a collision-course for destruction as scripted in Alan Moore' Watchmen. Needless to say, this would be bad.

7. Jimmy Hoffa's body -- After years of wondering whatever happened to Hoffa, it would be rather unsatisfying to find out that he ended up on Mars. This also applies to Elvis, D. B. Cooper, and everyone's left sock.

8. Kristen Bell -- If the woman who plated Veronica Mars is there, it means that someone has beaten NASA to getting humans on the Red Planet, which would be a shame after the success of the Curiosity landing.

9. Any signs of the new Total Recall movie -- Not many people were asking for a remake of the 1990 Arnold Schwarzenegger movie of the same name so let's hope the new version doesn't leave this planet.

10. Santa Claus - Santa Claus Conquers the Martians has the dubious distinction of being the only film listed by Wikipedia as both an example of Mars in Fiction and one of the Worst Films Ever Made. If Mars were to have one example of Earthly culture, it shouldn't be this.

11. The Mars Volta -- While these freakout rockers might make for a good concert to attend, if the planet Mars is anything like their video for L'Via L'Viaquez we would be better off staying away.

12. David Bowie -- He may have written about "Life on Mars," but an entire planet of Thin White Dukes? We'd be better off taking our chances with the Tharks.

Dan Meade is the Entertainment and Technology editor for Worldnow. You can follow him on Twitter here.