What works -- and doesn't -- to manage your tot's screen time - TulsaCW.com: TV To Talk About | The Tulsa CW

What works -- and doesn't -- to manage your tot's screen time 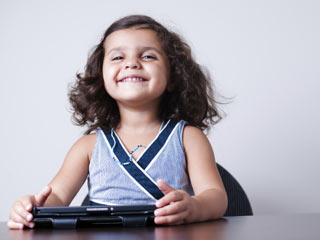 (HealthDay News) -- As any parent of a preschooler knows, media management can be a minefield of do's, don'ts -- and tantrums.

Tablets and other electronic gizmos can provide a child with learning and entertainment, but what works when it's time to sign off?

A new study into the issue holds some surprises, including the fact that giving a preschooler a "two minute" warning for media downtime may backfire.

Even though the study found almost four in every five parents used the technique, only 20 percent of them said it actually helped.

The "'two more minutes' warning can both set expectations and remind a child that he or she is not the one in control," said study lead author Alexis Hiniker.

That "can lead to a power struggle," she said. "So if that is something that a family is struggling with, I might recommend experimenting with ways of setting expectations that give the child a little bit more of a voice or a sense of agency."

Hiniker is a doctoral candidate in the department of Human Centered Design and Engineering at the University of Washington in Seattle. She and her colleagues are slated to present the findings this week at a meeting of the Association for Computing Machinery, in San Jose, Calif.

In the study, Hiniker's group interviewed 27 sets of parents, and 28 families also kept a "screen time diary" for two weeks.

One finding ran counter to what many may believe: In most cases, parents were not deemed to be using a tablet or other device as a kind of electronic "babysitter," the research team found.

In fact, nearly all the parents expressed a "general negative impression" of screen media for kids, and felt exposure should be carefully monitored and limited.

It was often tough to get a child to stop using devices on their own, however, and most said they -- not their child -- put an end to sessions. The most common reason for doing so was because of a change in situation, such as an impending play date.

How did the kids typically respond? Nearly 60 percent of the time parents got a "neutral" reaction to their request, and in 20 percent of cases children even reacted "positively," the researchers said.

However, things turned negative in about 20 percent of cases. And nearly all parents said their child had, on occasion, thrown a tantrum in response to being asked to leave their device. More than a third of parents said turning screens off almost always sparked a fight.

What worked best to ease those outbursts? Many parents said establishing regular, predictable viewing habits helped smooth out the process.

About four in five relied on advance, "two minute"-type warnings, trying to avoid conflict, which only worked a fifth of the time.

What did work? Shutting machines down at "natural stopping points" -- such as when a video ended, or when embarking on a daily routine such as breakfast.

And blaming the technology for the shutdown -- such as letting batteries die or losing Wi-Fi -- also prompted better responses, Hiniker's team said.

However, every family's dynamic is going to be different, Hiniker said.

"I wouldn't tell anyone to change what they do if they feel like their current practices are working well," she said. "And I definitely wouldn't recommend switching screens off in an unpredictable way without setting expectations. In fact, one of our findings was that routine and predictability actually helps a lot."

And she stressed that "being thoughtful about what children are watching is just as important as setting limits on the amount of time they spend with screens."

That point was seconded by Susan Neuman, a professor and chair of the teaching and learning department at the Steinhardt School of Culture, Education and Human Development at New York University, in New York City.

"What I urge parents to consider is not just the time spent viewing, but the content," Neuman said. "Children are going to be interested in the technology and it can be fun, it can be good. But the pace, the content and the age-appropriate quality of what they're watching matters."

Scott Campbell is a professor of telecommunication in the department of communication studies at the University of Michigan. He agreed, noting that watching shows and playing games "are immersive experiences" that have the potential to be "good and bad" for kids.

According to Campbell, it's critical that parents consider "where, when, with whom, what content, and a host of other contextual factors that can shape the experience, either positively or negatively."

Research presented at meetings is considered preliminary until published in a peer-reviewed journal.

There's more on technology and preschoolers at U.S. National Association for the Education of Young Children.