Weirdest Soups of All Time - TulsaCW.com: TV To Talk About | The Tulsa CW

Weirdest Soups of All Time 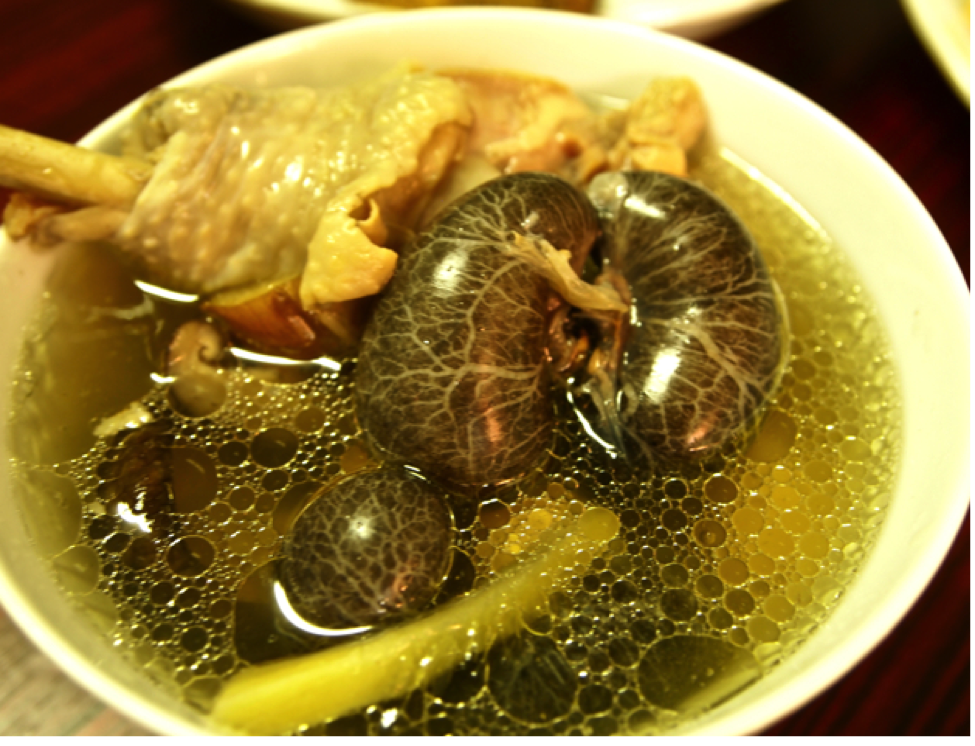 Soup is one of the oldest dishes, dating back centuries. It is believed to be an easy dish that is easily digested. Not only that, we all love the warming effects soup has on our bodies during the winter months.

Unlike the classic grandma’s chicken soup or sophisticated Salmon Chowder soup, soup takes a weird turn in different parts of the world. You won’t believe what is considered a delicacy in these soups. 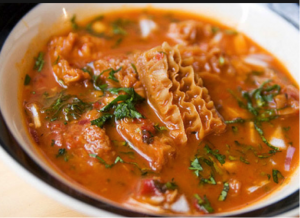 A traditional Mexican must-have in celebrations, Menudo soup, is a spicy soup made from tripe which is the stomach lining of a cow. It is a favorite for curing hangovers as it warms up nicely the morning after a drinking spree.

This soup is popular in family gatherings as all family members prepare it. It is viewed as the base for social interactions, especially during wedding receptions. The families of the bride and groom take the soup before and after visiting each other’s family.

The most common method of making Menudo soup involves spicing it up with dried chillis, and Menudo Blanco is used to ward off the stronger pepper flavour. Menudo soup is served with lots of garnishes like onion and cilantro. Not forgetting radishes or avocado to soak up the soup. 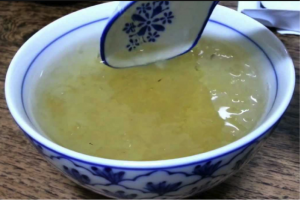 This soup is not only a delicacy in China but also very expensive. The Chinese have enjoyed this type of soup for over 400 years. And from the look of things, it does not seem to be going anywhere.

Birds nest soup is from the nests of swiftlet birds indigenous to South East Asia. Since the nests are held together by saliva, it becomes gelatinous with water. The hardened saliva has calcium, magnesium, iron, and potassium. It is believed to have medicinal effects including increased libido, improved immune system, and aiding in digestion.

The demand for bird nests soups is always in high demand in China since a bowl can be as expensive as 23-73. A kilo of bird’s nest can go for 1450, so you can’t fault the price of one serving. The cost of the bird’s nest depends on the grade and the bird’s diet. The colour of the nests also differs from white to dark brown. 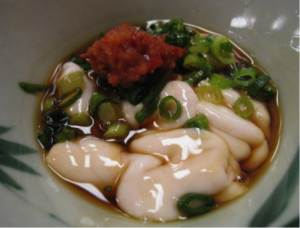 Also known as cod’s milk soup, this is the weirdest soup yet. It comes from the sperm sac of the male codfish. The sperm sac is cooked until it melts into chowder or like chicken broth becoming creamy. It is a taste you may not want in your mouth but if you are the exotic adventurer why not go for it? The Japanese find it delicious, and like the Birds Nest soup, it is known to increase libido and stamina in bed. 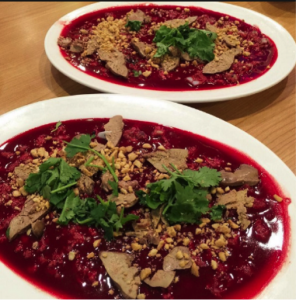 In Vietnam, it is known as Tiet Cahn soup. Fresh blood from ducks, pig, or geese is collected into a bowl and mixed with fish stock to prevent coagulation. The meat parts of the soup consist of duck innards which are cooked with coriander, mint, and other herbs and topped with peanuts. The water from the cooked meat is mixed with the blood and allowed to settle.

This soup is accompanied by rice wine or a strong alcoholic drink.

This soup originates from the people of the Chagga tribe from the base of Mt. Kilimanjaro. Their source of livelihood is from bananas and coffee, and these are the two main ingredients that make this soup. They also add beans, dirt (earth) and twigs. The dirt adds an earthiness flavour which makes it unique to their tribe. 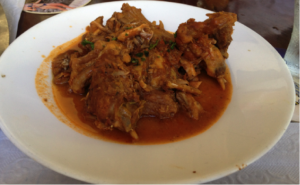 This soup is a favorite in Nicaragua. Although it is hot and humid most time of the year, you cannot fail to spot men indulging in this delicacy. It is also said to be an aphrodisiac and a hangover cure. Iguana is considered a chicken so you can expect the soup to taste like chicken. The entire corpse of the iguana is served in the bowl.

Iguanas are now an endangered species in Nicaragua, and there’s a law against hunting iguanas from January to April. Otherwise, locals enjoy this soup topped with onions, carrots, mint, and chayote. They say it is tastier than chicken; no wonder you will find it served in every local restaurant. 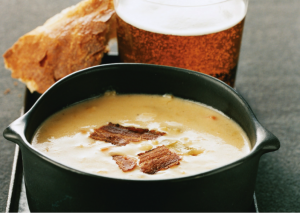 This soup originated in Germany, Central Europe around the middle ages. It is just as the title indicates, soup made from beer. The soup was a breakfast staple for a young ruler of Brandenburg Prussia, Prince Friedrich Wilhelm. This soup consisted brown or dark beer, fat, cream, and egg yolk or flour. It was later made to include cheese and onions when the soup needed to be more substantial so that it would be eaten with toast.

This soup is now a classic in fine restaurants in Wisconsin as beer and cheese soup. Surprisingly, this soup is no longer served in modern Germany. But in Wisconsin, it is celebrated as quick and easy soup that can also be elevated with the finest ingredients like cheddar cheese that is as old as ten years.

Beer soup is now cooked with less beer and with other conventional ingredients like chicken broth, plain flour instead of egg yolk, Worcestershire sauce, low-fat milk and of course cheddar cheese. It also includes veggies like celery, carrots, onions, garlic, and herbs for seasoning. Beer soup is commonly taken with popcorn toppings.

Bat soup is a delicacy in Cambodia. You wouldn’t imagine finding this hairy animal in a meal but the district of Kandal Province, Cambodia, has found a way brew it in soup. This soup is also known to cure particular ailments because of its medicinal properties. The bat’s blood is believed to cure respiratory illnesses while the eyeballs are said to cure eyesight problems

In Cambodian restaurants, the bat is served in the same way lobster is served in Mediterranean seafood restaurants. The bats are presented in a cage, and you get to choose the one for your soup. It can also be served raw if your stomach can take it, but most people prefer bat in soup.

The bat’s flavour is influenced by what the bat has been eating before its death so you can expect a new flavour every time you order bat soup. The bat is served with onion, coconut cream, and soy sauce sides.

The method of preparation is perhaps the weirdest since a live bat is thrown in a pot of boiling water before the other vegetables are added. When the bat is cooked through, it is removed from the pot and skinned. The meat and any other parts you may want in the soup boil again before serving. 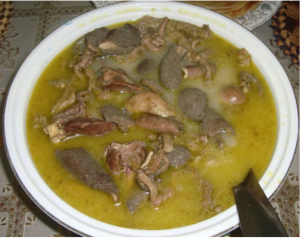 Just like Menudo soup, Supu is prepared using many parts of an animal’s gut. This soup originates from Tanzania, and it is from a goat’s liver, lungs, intestines, tongue, and stomach. It also includes the goat’s head and cow’s hooves which are cooked differently. The meats from the goat’s stomach and the soup from the head and hooves are then served together in a bowl to make a traditional breakfast. This soup is said to cure hangovers. 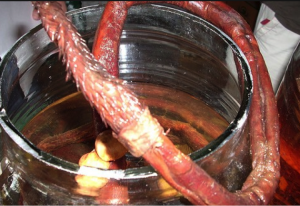 This is a rare indulgence as tiger penis is not easy to find. This soup is enjoyed in Asian Cultures mostly because it is believed to carry strong aphrodisiac properties. A bowl of Tiger penis soup can go for around 300 which goes to say how rare it is to find a tiger penis which is the main ingredient of the soup.

The tiger penis is dried and then soaked in water for a week. It is then simmered in a pot for up to 24 hours alongside other spices like tiger bone, spices, and other medicine.

Since tigers are endangered species, you may be duped to believe the soup you are taking is made from tiger penis yet it’s from deer or ox. That’s why eating tiger penis is illegal in China. 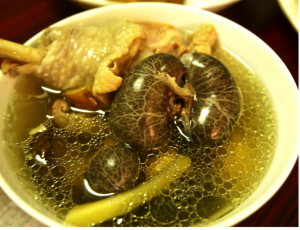 This is another unusual soup. It is for anyone with exotic taste buds as it is not your typical chicken soup. This soup has chicken testicles instead of meat. It is also cooked with vegetables and chicken broth until everything is tender.

The taste of the chicken testicles is compared to tofu when it comes to the creamy and soft taste, but they have a thin sausage-like skin. Some people compare the taste to that of undercooked eggs.

This soup is also believed to improve a man’s stamina in bed, and also help women get beautiful skin. These are some of the benefits that make it hard to resist. You will also find chicken testicle soup with either white or black testicles.

There you have it; the weirdest soups of all time. It may come as a surprise to many, but these soup are actually enjoyed in different parts of the world. If you have the adventurous spirit, go ahead and take on the taste once challenge across the globe. You will find more unusual soups including fruit soups, and deer placenta soups which we’ve not covered on our list.

Otherwise, these are the most unconventional soups we have found so far.