Paul Tudor Jones: 'Gold Has Everything Going For It' - TulsaCW.com: TV To Talk About | The Tulsa CW

Paul Tudor Jones: 'Gold Has Everything Going For It'

Last week was a strong one for gold, which managed to eke out its fourth straight week of positive gains. The price of the yellow metal broke above $1,350 an ounce last Friday, while gold miners, as measured by the NYSE Arca Gold Miners Index, tested their 52-week high.

Investors sought safe haven investments on a number of geopolitical risks, including protests in Hong Kong over the now-delayed extradition bill and an attack on two oil tankers near Iran and the Strait of Hormuz, the world’s busiest sea lane through which a fifth of global oil consumption passes. After placing the blame on Tehran, President Donald Trump now faces a tough decision on how to respond, if at all.

Billionaire investor Paul Tudor Jones, founder of and hedge fund manager at Tudor Investment Corp., said in a Bloomberg interview last week that geopolitical disruptions have made gold his favorite trade in the next 12 to 24 months.

The biggest catalyst for such a move, Jones believes, is the ongoing U.S.-China trade war and the broader implication of shrinking global trade. After 75 years of globalization and free trade, we’re seeing a return to the use of tariffs and other protectionist policies.

Remember, it was the 1930 Smoot-Hawley tariff “that helped send the U.S. and world economy into a decade-long depression,” according to a 2015 article by now-National Economic Council Director Larry Kudlow and former Federal Reserve Board of Governors nominee Stephen Moore. Just last month, global manufacturers contracted for the first time since 2012 due in large part to trade tensions. World trade volume has also sunk the most since the financial crisis.

Meanwhile, Trump is threatening to impose tariffs on $325 billion in imports from China, in addition to the approximately $200 billion that are already being taxed. Trump and China’s president Xi Jinping are expected to meet later this month at the G20 summit in Japan, where hopefully the two leaders can hash out a resolution to the trade war.

Jones isn’t the only billionaire hedge fund manager who thinks gold looks attractive right now. In a recent investor webcast, DoubleLine CEO Jeffrey Gundlach said that he’s “long gold.” His call is based on the belief that the U.S. dollar will be substantially lower by the end of the year. (Want a sure way to push the dollar down? Wipe out all $1.5 trillion in student loan debt in the U.S. Senator and presidential hopeful Elizabeth Warren will reportedly introduce a bill intended to do just that. What’s next—mortgages?)

And then, of course, there’s Ray Dalio, the world’s most profitable hedge fund manager. Dalio is a true believer in the 10 Percent Golden Rule, and according to Bridgewater’s SEC filings, he maintains significant positions in gold across all tiers in the industry.

Last week the yield curve inversion between the five-year and three-month Treasury yields passed a key threshold that, in the past, has telescoped a recession. In a tweet dated June 13, Bloomberg’s Lisa Abramowicz shared a chart of the yield inversion and commented: “Cam Harvey, the economist who first linked an inverted yield curve to economic declines, pinpoints the 3-month/5-yr curve as a key recession indicator once it inverts for a full quarter. It officially finished a full quarter of being inverted yesterday,” meaning last Wednesday. 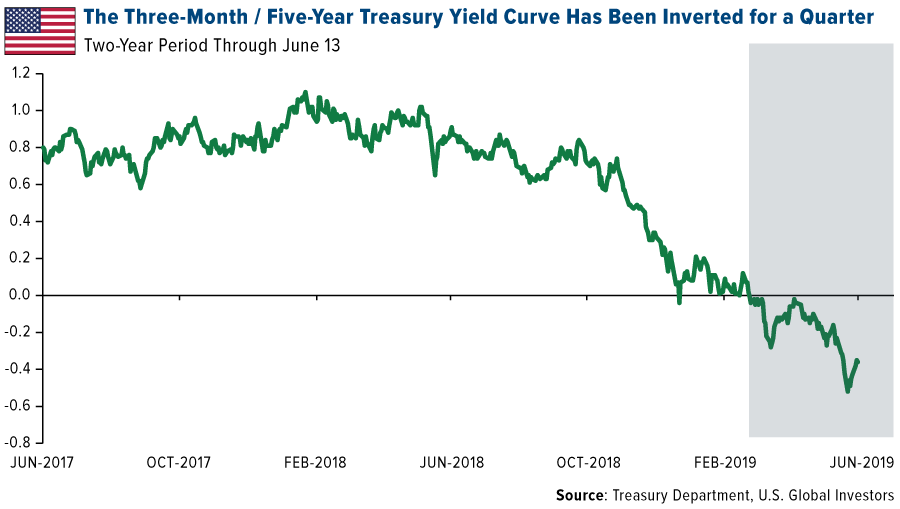 As for when we can expect a recession, Gundlach says he now believes there’s a 40 percent to 45 percent chance of one occurring within six months, a 65 percent change in the next year.

The big news involving oil last week was, as I mentioned earlier, the attacks on the two tankers near the Strait of Hormuz, among the world’s most important strategic chokepoints. Every day, as many as 17.2 million barrels of oil pass through the strait, if you can believe it. Because it’s the only way into and out of the Persian Gulf, both Saudi Arabia and the United Arab Emirates (UAE) have proposed building pipelines in order to bypass the historically dangerous shipping route.

Following the attack on Thursday, oil prices jumped as much as 4 percent.

But unless this incident escalates into something else—a U.S. military response, for instance—I see it as merely a short-term boost to oil.

A much more meaningful, long-term impact on oil and oil stocks is Norway’s divestiture from fossil fuels. The Scandinavian country’s sovereign wealth fund, known as the Norwegian Government Pension Fund, is the largest such fund in the world, valued at more than $1 trillion. Established in 1990 to invest in the profitable North Sea oilfields, the fund also invests heavily in international stocks, bonds and property in nearly 80 countries.

In the first quarter of this year, the fund delivered returns of $85 billion, its best quarter ever.

But following a recommendation from the country’s parliament, the fund will sell off some $13 billion of stocks in companies involved in the exploration and production of fossil fuels, including oil, gas and coal. The move is a huge step toward shifting assets into renewable energy.

The divestiture won’t have much of an impact on large-cap companies such as Royal Dutch Shell and Exxon Mobil , but it could have consequences for some mid-tier firms such as Anadarko Petroleum , Occidental Petroleum and EOG Resources .

Combined with OPEC’s recent forecast for weaker global oil demand, Norway’s decision—perhaps needless to say—is expected to be a headwind for the fossil fuel energy industry as whole.

All Eyes on Hong Kong

On a final note, I wish to express my support for the 7.4 million people in Hong Kong, especially the estimated 2 million who have took to the streets to protest an amendment that would allow suspected criminals in Hong Kong to be extradited to mainland China.

The former British colony, now autonomous territory, is one of the world’s great success stories. For more than 20 years, it has ruled itself with its own government, currency and police force, and thanks to economic liberalization, it’s risen to become one of the top three financial hubs following New York and London. It consistently ranks among the most competitive places on earth, as well as one of the best to conduct business in.

Every nation wishes to have the freedom to make its own decisions with respect to its laws, economy, security and more, without interference from another sovereign state. That wish is at the heart of Brexit and, frankly, the election of Donald J. Trump. At the same time, it’s important to remember that government policy is a precursor to change.

At the moment, the bill has been delayed "indefinitely." Let’s see if the protestors can manage to get it turned over permanently.

Before I leave you, I want to congratulate the Toronto Raptors on their very first NBA Finals win. As I mentioned earlier, they are now the most valuable sports franchise in Canada, even above the Maple Leafs.

It really is incredible to see not just an entire city, but an entire country, get behind this team. Two of its superstars, as many of you may know, previously played for Gregg Popovich of the San Antonio Spurs Kawhi Leonard and Danny Green.

I’ve been in San Antonio during a Spurs championship win and naturally the excitement was widespread. The enthusiasm in Toronto, however, even a day after the win, was just as grand—if not more so. Fans from all over took trains to the stadium to purchase championship t-shirts and flags. Lines of people literally wrapped around the stadium.

The joy of winning truly does create economic value.

Looking for someone to make sense of the markets? Subscribe to Frank Holmes’ award-winning Frank Talk CEO blog!