How to Get Access to Small-Cap Gold Mining Stocks - TulsaCW.com: TV To Talk About | The Tulsa CW

How to Get Access to Small-Cap Gold Mining Stocks

With the price of gold trading above $1,430 an ounce as of June 25, now might be a good time for generalist investors to consider getting exposure to the yellow metal. Many investors have done just that. Bloomberg reports that SPDR Gold Shares, the world’s largest ETF backed by physical gold, attracted nearly $1.6 billion last Friday alone, the fund’s biggest one-day haul since its inception in 2004.

There are other ways to get exposure besides bullion, of course, and that includes producers and explorers of the metal. But it’s important to get the right kind of exposure.

I believe one of the best ways to get access right now is with junior, small-cap miners headquartered in economies where the price of gold has surged to record or near-record highs. Priced in the strong (yet weakening) U.S. dollar, gold has done well in June, but it’s still some ways away from its all-time high of around $1,900. Because of favorable currency exchange rates versus the dollar, the metal has performed even better in Australia, having crossed above AUD$2,000 for the first time ever last Friday. In Canada, its price is within striking distance of its 2011 record high of nearly CAN$1,880.

Higher gold prices, then, have been a major tailwind for producers headquartered in Australia and Canada, the number two and number five gold-producing countries by output in 2018.

They’ve also been a tailwind for our two gold mutual funds, both of which maintain overweight exposure to Australian and Canadian miners. Our flagship Gold and Precious Metals Fund (USERX) had a combined 75.31 percent weighting in the two countries as of March 31, while our more junior-focused fund, the World Precious Minerals Fund (UNWPX), had one of 87.58 percent.

Our two gold funds also have overweight positions in smaller mining companies, which have historically appreciated much faster than larger industry players when the price of gold has taken off.

This has especially been the case when a junior miner has reported a new discovery from a drill hole that shows a high grade of mineralization. In October of last year, Vancouver-based Westhaven Ventures—which we held in UNWPX as recently as March 31—reported positive drill results at its Shovelnose gold property in British Columbia. Its stock jumped more than 345 percent following the news, from $0.24 per share on September 28 to $1.07 by the end of October.

The same thing happened with Wallbridge Mining . In September 2018, the Ontario-based miner announced positive results from its underground drill program at its 100 percent-owned Fenelon gold property in northwestern Quebec. Shares of the $165 million-market cap company doubled in value that very month, from $0.11 to $0.22 per share.

And it appears there could be even further upside potential, judging from Wallbridge’s recent insider buying activity. Within the past three months through June 25, insiders—which include directors, officers, executives and other employees—have gobbled up as much as $12.1 million in Wallbridge shares while selling only $700,000. Such activity has traditionally been a sign of confidence in anticipated growth. 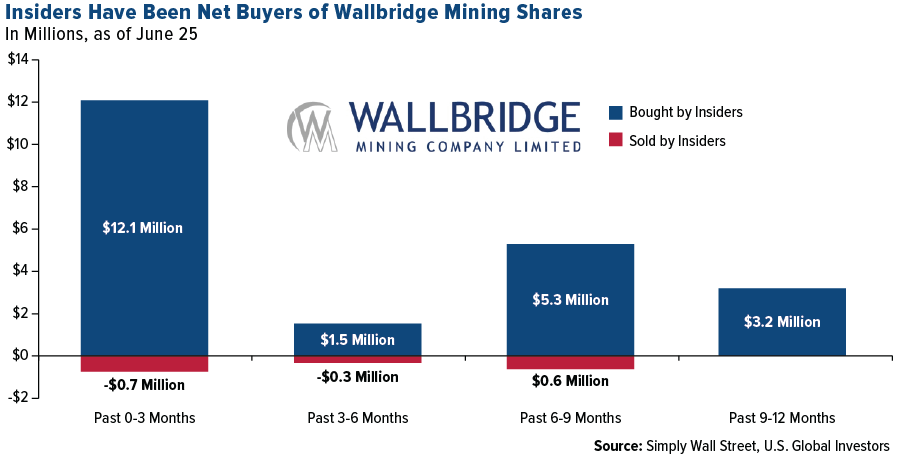 Take a look below. What you see are the top 10 performing gold stocks over the past 12 months that were held in at least one of our two gold funds. In a few cases, such as Wesdome Gold Mines, they were held in both funds as of March 31. 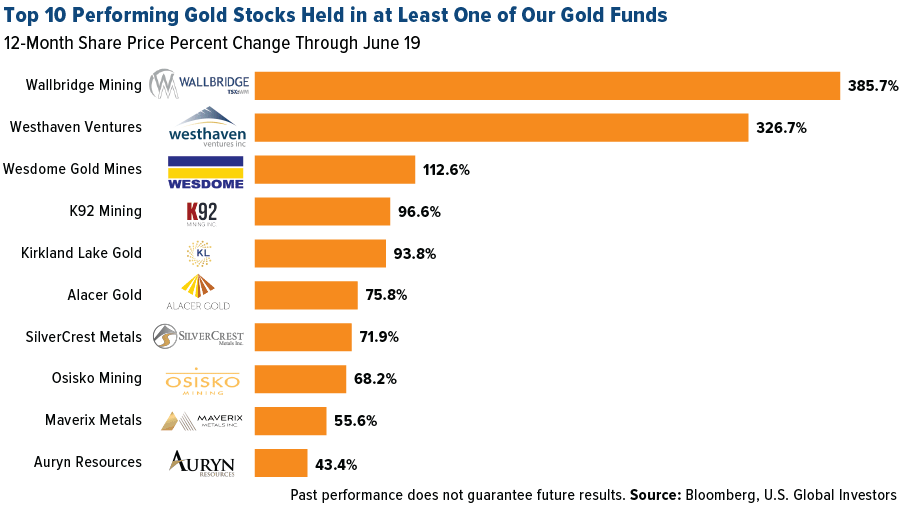 With few exceptions, every name on this list is a small-cap Canadian firm. Alacer is headquartered in Denver, while Kirkland Lake and Osisko Gold Royalties would not be considered junior as they both have market caps over $1 billion.

Wesdome, by the way, was the number one holding in both USERX and UNWPX as of March 31. I hope you agree that the allocation was well made, as the Toronto-based producer was up more than 112 percent for the 12-month period.

Remember, much of this growth occurred before the price of gold popped to six-year highs.

How High Can Gold Get?

Looking ahead, I believe this gold rally is just getting started. Prices have been muted in the past year thanks to the strong U.S. dollar relative to other currencies, but we’re already seeing some weakness on anticipation that U.S. interest rates will be cut sooner rather than later. What’s more, the pool of negative-yielding government bonds around the world has expanded recently to $13 trillion, a new record amount. Historically, negative yields have been constructive for gold prices.

If you believe that these developments suggest higher gold prices, it might be worth it to you to look into junior gold stocks.

We’ve been doing exactly that for decades now, as our Gold and Precious Metals Fund (USERX) was the very first no-load gold mutual fund in the U.S., established in 1974. Our World Precious Minerals Fund (UNWPX) came later, in 1985, and complements USERX by giving investors greater exposure to junior mining companies for added growth potential.

Learn more about both funds by clicking here!

Please consider carefully a fund’s investment objectives, risks, charges and expenses. For this and other important information, obtain a fund prospectus by visiting www.usfunds.com or by calling 1-800-US-FUNDS (1-800-873-8637). Read it carefully before investing. Foreside Fund Services, LLC, Distributor. U.S. Global Investors is the investment adviser.