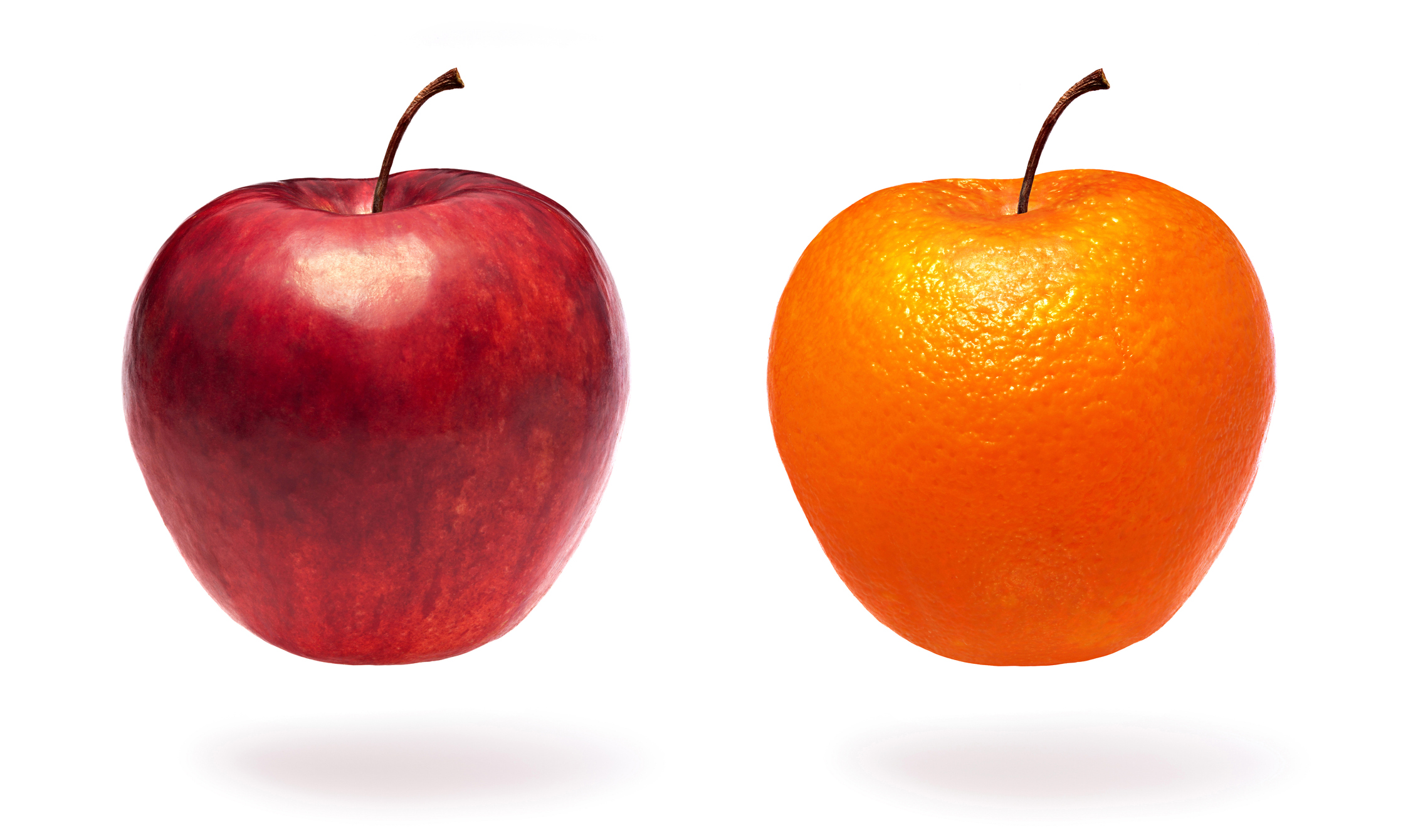 The Teacher Retirement System of Texas pension fund is $46.2 billion in the hole, only 76.9% funded. Had the managers chosen the simplicity of Couch Potato investing 10 years ago, the pension would be fully funded.

That's quite a difference.

I learned this while examining the latest report from the largest public pension fund in our state. Then I measured it against the simple, low-cost index fund investing method I have advocated for nearly 30 years. 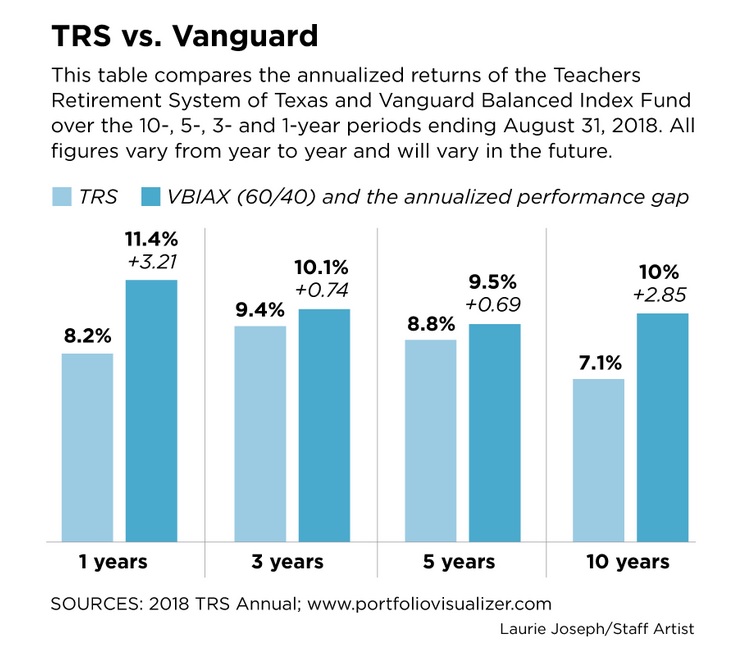 But here's the reality. Another year of complexity, alternative investments and hedge fund commitments has tripled the annualized return gap between the pension fund and Vanguard Balanced Index fund (Admiral shares) over the trailing 10-year period.

While the TRS pension beat Vanguard Balanced Index by 3.09% in 2017, it trailed by 3.21% in 2018. That difference, plus rolling forward a year, is responsible for the larger long-term gap.

Will the gap change in the future? You bet. But the performance gap, whatever its size, is persistent enough to raise rude questions.

Such as, should the fund be managed in the same way in the future? Is it reasonable to bet so much on costly, illiquid alternative investments and hedge funds?

These are not philosophical questions.

If you're one of the 1.6 million Texas primary-, secondary- and university-level teachers covered by the plan, you have an obvious interest in a well-funded pension.

But let's get back to the money.

Indeed, that $46.2 billion is equal to the $46.2 billion unfunded actuarial accrued liability announced in the most recent report.

In other words, had simplicity been chosen, the pension fund would be fully funded.

It's important to note here that the Vanguard Balanced Index fund isn't some far-out, weirdo investment vehicle. It's a traditional 60/40 mix of domestic stocks and bonds, the mix used by pension funds and endowments for decades. It's super bland, a mix that many, perhaps most, professionals would call unsophisticated or nave.

It invests in the Vanguard Total Stock Market Index fund and the Vanguard Total Bond Market Index fund. So it represents the entire stock market — big cap, small cap, value stocks and growth stocks. It also represents the entire domestic bond market — Treasuries, mortgage-backed securities and corporate bonds. Both funds cost nearly nothing to manage. Both are highly liquid. They are investments in America and American business investments in the rest of the world. It's the whole 9 yards.

Instead, the pension fund has moved increasingly from liquid investments to high-expense alternative investments that have limited liquidity.

According to the Pension Review Board analysis of the fund, for instance, alternative investments were 14% of net total assets in 2008 but are now 42.1%.

The best-known alternative investments are hedge funds of all kinds and private equity funds. But they can also include managed futres, venture capital, direct investments in startups, private companies and investment in real assets such as real estate, oil, timber and agricultural land. The Yale endowment famously achieved superior returns with the early use of such investments. Followers, however, have not been so fortunate.

Nor is the commitment to alternative investments complete. On page 56 of the TRS comprehensive annual report, we learn that the fund has $32.3 billion in "unfunded capital commitments." So another 21% of current fund assets are destined for high-fee, limited-liquidity investments.

But simplicity and low cost would have been worth $46.2 billion more.

I've seen quite a few of these articles crop up lately so I decided it's time to address them head on.

First, I sent this article to astute blog reader of mine who didn't mince his words:

The benchmark chosen by Burns strikes me as ridiculous. A $154 billion fund should not be concentrated exclusively in US stocks and bonds. Nor, ideally, should it be concentrated solely in stocks and bonds. The argument advanced is flawed in the same way arguments about hedge funds having underperformed SPY are flawed: they're supposed to hedge, and a hedge is never free. That's certainly not to defend hedge funds, only to say that any argument against them should not be as vacuous as that.

So, while I support the argument that even the pension professionals cannot as a group outperform cheap indexing, the argument advanced by Burns undermines it due to the idiocy of the benchmark he chose.

Now, this blog reader isn't a pension expert, he's a sophisticated high net worth investor who has his own views on pensions and indexing, but even he realizes how silly Burns' argument is because he chose an index which is only made up of US stocks and bonds.And what have US stocks and bonds been doing over the last ten years? Rallying like crazy as the Fed and other central banks keep pumping huge liquidity into the global financial system.

But pensions aren't about shooting the lights out in terms of performance, they're first and foremost about matching assets with (long-dated) liabilities.

Sure, the Vanguard Balanced Index fund performed better than the Teacher Retirement System of Texas and most US public pensions over the last ten years. So what? How prudent would it be to invest trillions of US pension assets in this balanced index fund which is far more volatile than what pensions are willing to tolerate because it's made up of 60% stocks.

Have a look at the annual performance of the Vanguard Balanced Index Fund Admiral Shares (VBIAX): 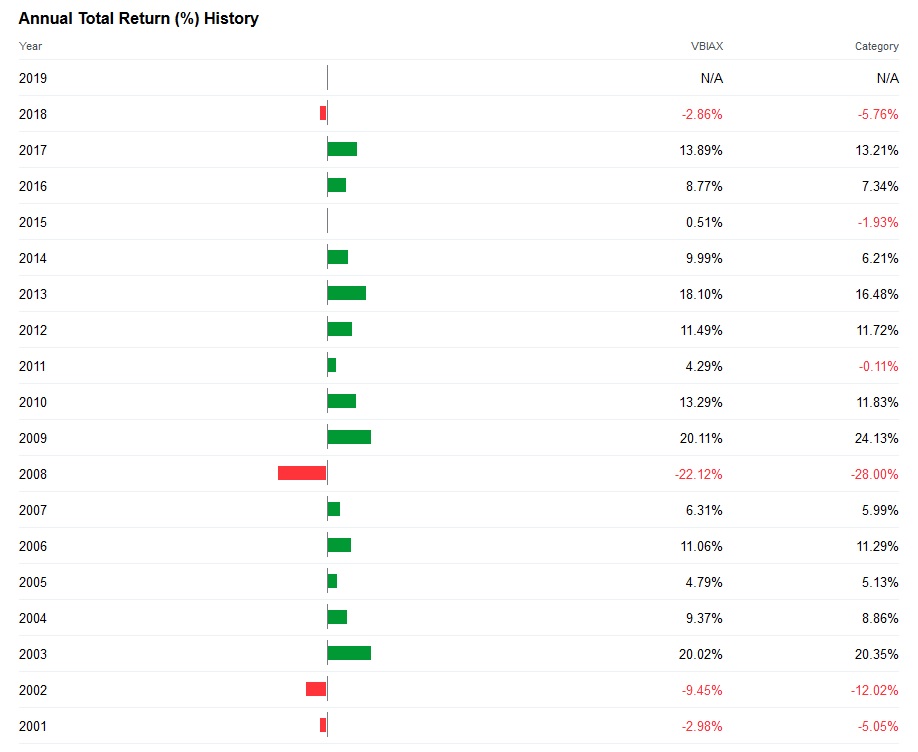 When you factor in 2008, the long-term performance of the Vanguard Balanced Index fund isn't so great, up 6.1% annualized since its inception:

Of course, a lot of pensions also got clobbered in 2008 precisely because they were much more exposed to stocks than they should have been, and in the last ten years, they have been diversifying away from stocks and bonds into alternative investments like private equity, real estate, infrastructure, hedge funds and private debt to better match assets with their long-dated liabilities.

After 2008, most pensions got back to risk mitigation, steering away from taking huge equity risk to shoot the lights out. Properly managed, pensions should be trying to match assets with liabilities with the least volatility possible to try to minimize the volatility of the contribution rate.

The Teacher Retirement System of Texas (TRS) is actually part of the more sophisticated pensions in the United States. Its managers are doing exactly what they should be doing to better match assets with their long-dated liabilities, diversifying across public and private markets.

Is it underfunded? Yes it is, for a lot of reasons, so are many US public pensions, including CalPERS and CalSTRS, but nobody is claiming their performance should be measured against the Vanguard Balanced Index Fund. That's just insane.

I'm amazed at how many supposedly financially literate commentators can't understand pensions are about matching assets with liabilities and how the shift into private markets is a better duration match to liabilities and has has also added great value-add, especially in Canada where they co-invest to reduce fees. Even funds like HOOPP and Vestcor which aren't as heavily weighted into privates have undertaken absolute return strategies internally to reduce equity risk.

There are tons of clueless commentators like Coyne and Burns publishing utter nonsense in newspapers, and the average person reads their comments and thinks pension funds are useless entities, just index all their assets!

Let me end by stating the Vanguard Balanced Index fund is fine for retail investors looking for a balanced fund (be wary of drawdowns, however) but it's not so fine for large pensions and other institutional investors managing billions to cover long-dated liabilities. Anyone claiming otherwise is an ignorant fool.

Below, while pundits move with the daily whims of market volatility, successful investors' main worry lies with their long-term return. But are their portfolios prepared for what is to come after a decade of search-for-yield, high valuations, and little volatility has lulled some markets into complacency? How can institutional investors manage the new risk challenges as interest rates, after more than a decade, are slowly moving up? Will the expected volatility in both equity and debt markets require investors to reallocate their portfolios substantially? And if the push into alternatives is expected to continue, what are the risks of increased dependence on private markets?

Watch this panel discussion on Managing for the Long-Term from the Milken Institute featuring Jerry Albright Chief Investment Officer, Teacher Retirement System of Texas and other prominent investors. Great discussion, take the time to watch this.