It's Time We Talked About Modern Monetary Theory (MMT) - TulsaCW.com: TV To Talk About | The Tulsa CW

It's Time We Talked About Modern Monetary Theory (MMT) 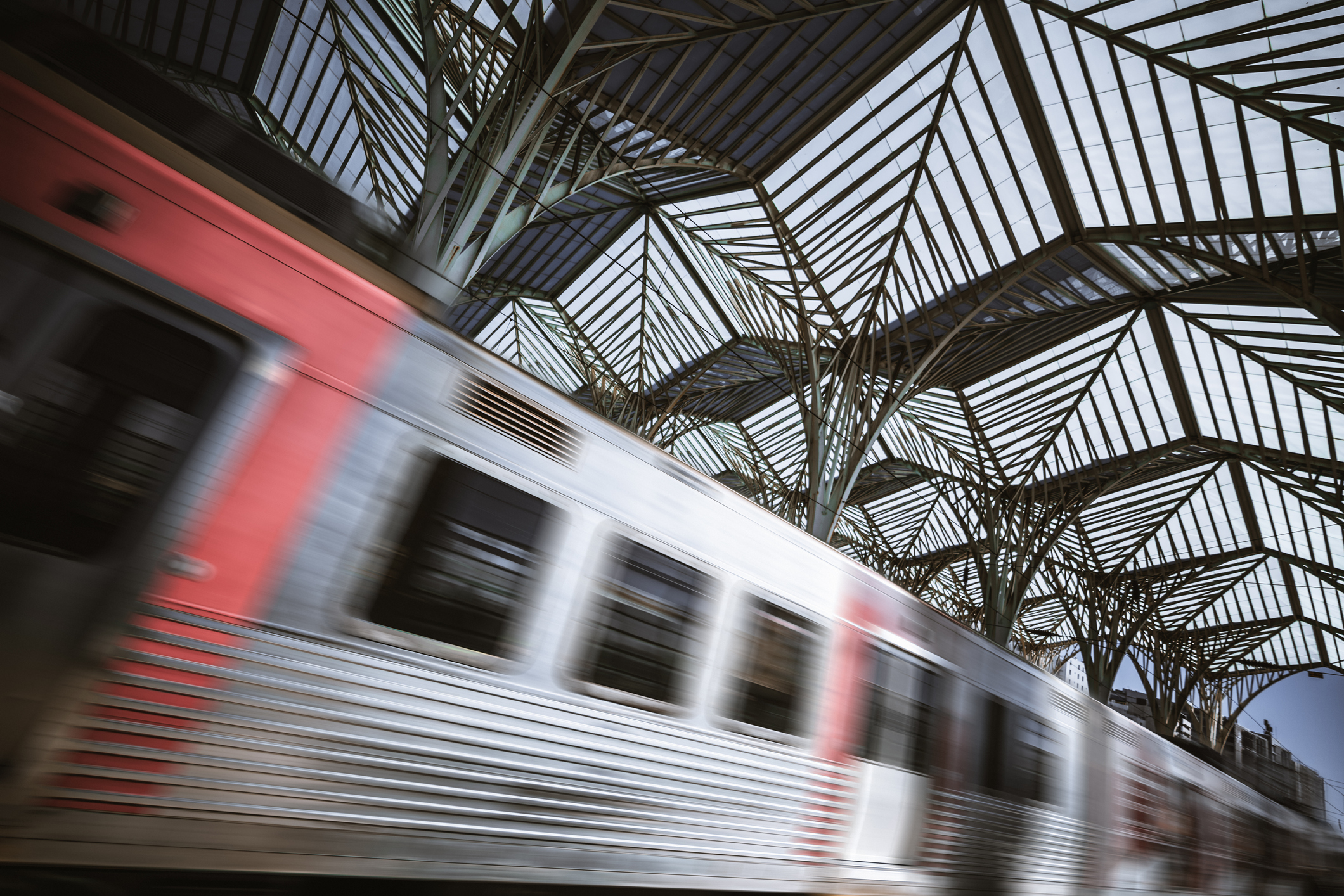 Fans of the improvisational comedy program Whose Line Is It Anyway? may recall host Drew Carey describing it as “the show where everything’s made up and the points don’t matter.”

Interestingly, if we replace “show” with “economic doctrine,” and “points” with “money,” we end up with a near-accurate description of modern monetary theory (MMT).

You may have noticed MMT trending in the news in the past few months, thanks in large part to the fact that it’s supported by a number of far-left socialist politicians such as Bernie Sanders and Alexandria Ocasio-Cortez (AOC). 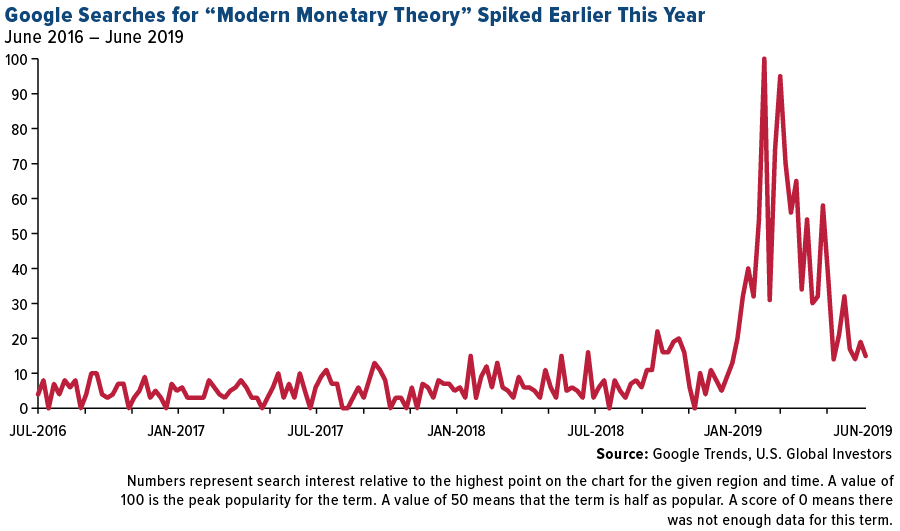 I’m bringing it up now because the first round of Democratic presidential debates were held last week, and if you happened to tune in, you were likely treated to some policy proposals that seem to fall into the MMT camp, even if the term was never uttered. Think “Medicare for all,” free college tuition and the wholesale cancellation of $1.6 trillion in student loan debt. Then there’s the Green New Deal, which AOC recently admitted could cost upwards of $10 trillion.

How would these and other huge federal programs ever be paid for? As I see it, there are two main ways. The first is to raise everyone’s taxes and create whole new ones out of thin air—a “wealth tax,” for instance. The problem is that this method is politically unpopular, as you know.

The second way is much more appealing, to some: Simply print as much money as the program calls for, and then spend it.

That’s the basic idea behind MMT. Remember, everything’s made up, and the money doesn’t matter.

You see, advocates of MMT insist that because fiat currency is ultimately a creation of the state, governments can and should print as much of it as needed to fund massive public works, guarantee government jobs for the unemployed and much more. And since a government can never run out of money, the theory says, it can never default on its debts. Deficits are meaningless.

Anyone who’s studied macroeconomics knows that unfettered money printing on this scale is a recipe for runaway hyperinflation. Look at Weimar Germany in the 1920s, or Zimbabwe a decade ago. Today, Venezuela is facing a head-spinning inflation rate of 10 million percent, according to the International Monetary Fund (IMF).

Could such inflation happen in the U.S.?

“If MMT becomes policy, then we can expect a similar bout of high and volatile inflation leading to negative real returns for bonds and cash,” writes Chris Brightman, head of research and investment management at Research Affiliates.

But, as Brightman explains in a paper titled “Dismiss MMT at Your Peril,” the hyperinflation may be by design in order to “level the playing field”:

Unexpected inflation shocks cause the prices of stocks and bonds to plummet. Proponents of MMT may interpret destruction of financial wealth as necessary and beneficial because few of the bottom 160 million [Americans] hold stocks or bonds. A burst of inflation will help level the playing field.

If hyperinflation destroys stocks and bonds, not to mention cash, what can investors do to protect their wealth?

This is one of the reasons why I always recommend a 10 percent weighting in gold—to hedge against government policy. That includes 5 percent in gold bullion and jewelry, and 5 percent in high-quality, well-managed gold stocks and funds.

You may question whether MMT could become policy here in the U.S., as it would fundamentally rewrite the rules of how capitalism and free markets operate. I question it as well, but there’s no denying the groundswell of interest and support. It was recently reported that a new 600-page, $70 textbook on MMT, Macroeconomics, sold out of its initial printing. And a MoveOn straw poll of progressive voters last week showed that far-left candidate Elizabeth Warren was highly favored to win the Democratic nomination, with a 21-point lead over Sanders. 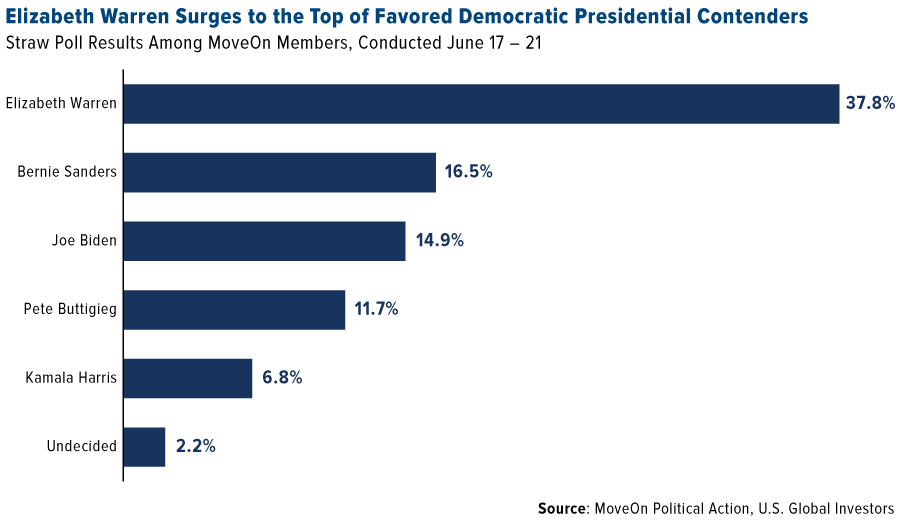 There are other reasons to make sure you have exposure to gold, of course. Last week, all five regional Federal Reserve manufacturing indexes declined in June, the first time in six months that we saw a simultaneous drop, according to Bloomberg. This weakness is yet the latest sign that global economic deceleration and trade tensions are impacting manufacturing. 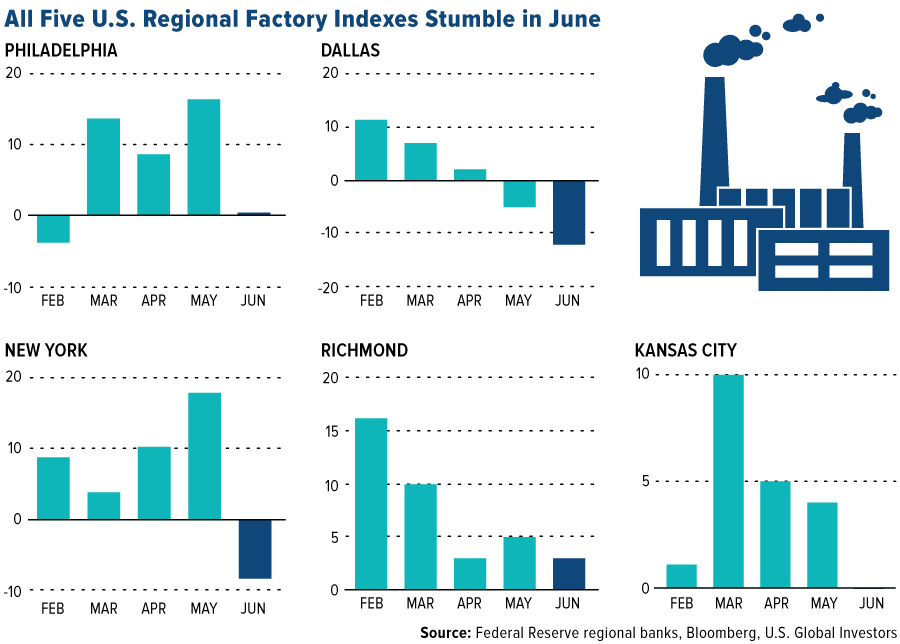 Among those who see trouble ahead is billionaire hedge fund manager Paul Singer. His firm, Elliott Management, which manages some $34 billion, has one of the most impressive long-term track records, generating a compound annual growth rate (CAGR) of 13.5 percent since its inception in 1977, with only two down years.

Last week at the Aspen Ideas Festival, Singer said that he believed the global economy is likely heading toward a “significant market downturn,” perhaps as much as 30 percent to 40 percent. That would put it in the same company as the late 90s dotcom bubble and the 2007-2008 financial crisis.

“The global financial system is very much toward the risky end of the spectrum,” Singer commented, adding that global debt and derivatives are at an all-time high.

Instead of singling out the U.S.-China trade war as the catalyst for this potential slowdown, he criticized global monetary policy that currently favors lower interest rates and has created an imbalance relative to fiscal policy.

What banks should have done, Singer suggested, “and what they should do now, is try to restore the soundness of money. They should not be cutting rates right now. They should be calling on the congresses and parliaments around the developed world to take steps to deal with the economic slowdown in growth.”

I’ve seen Singer speak before, and he’s discussed at length that he likes gold for its diversification benefits. This is in line with fellow billionaire hedge fund manager Paul Tudor Jones, who recently said that gold is his favorite trade in the next 12 to 24 months.