GBP/USD: May Bounce From Oversold Conditions - TulsaCW.com: TV To Talk About | The Tulsa CW

GBP/USD: May Bounce From Oversold Conditions

When the central bank moves from wishing to raise rates to express deep concerns the currency falls. That is what has happened to the pound after Mark Carney, Governor of the Bank of England, said the BOE will need to assess the "sea change" in the global economy. His words on Tuesday continue weighing on Sterling also today.

Sterling has also suffered from weak data. Markit's forward-looking purchasing managers' indices (PMIs) have all come out below expectations. The last hammer to fall came today. Services PMI came out at only 50.2 points not only below expectations but also reflecting stagnation in the UK's largest sector. The composite PMI is the lowest since July 2016 immediately after Brits voted to leave the EU. Fears about a hard Brexit are driving business sentiment lower.

And after all this week's data is out the focus shifts back to Brexit. Both Boris Johnson the clear favorite to become PM and his rival Jeremy Hunt have promised to renegotiate the Withdrawal Agreement. However, the EU has repeated once again that the deal will not be reopened.

Moreover, there are no viable technological solutions to maintaining an open border on the island of Ireland. A British official dismissed hopeful claims from the candidates. Further comments from Johnson may move the pound later on.

In the US, a big bulk of data awaits traders ahead of Independence Day tomorrow. The ADP Non-Farm Payrolls and the ISM Non-Manufacturing PMI serve as top hints toward Friday's all-important jobs report.

Overall, UK politics and US data are set to dominate. 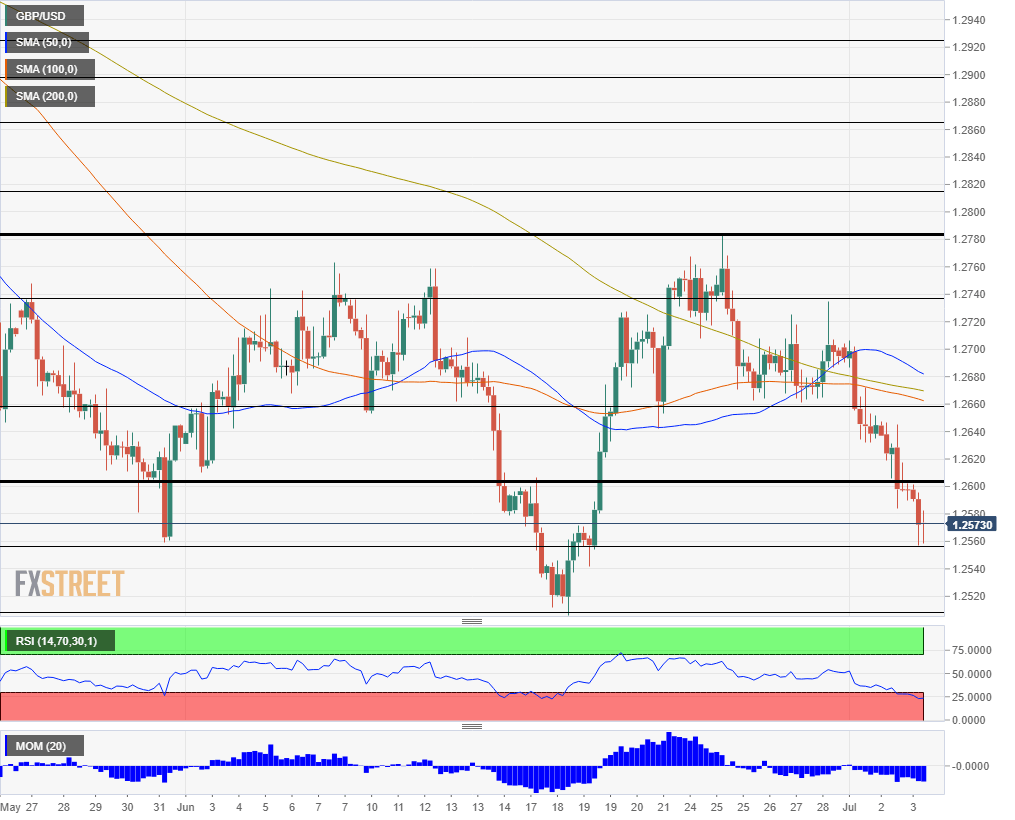 The Relative Strength Index on the four-hour chart is well below 30 in oversold territory and implying a bounce. However, such a correction may be temporary as other indicators such as momentum and the 50, 100, and 200 Simple Moving Averages are pointing to further falls.

Resistance awaits at 1.2605 which has played the roles of both support and resistance recently. Next, 1.2660 provided support in late June and 1.2740 was a swing high around the same time.