This year's four Honorary Award-Winners will deliver conferences on their career achievements and creative style: Yoko Shimomura, Bruce Straley, Tim Willits and Greg StreetWriter Sam Barlow, Kevin Chotenau and Sbastien Renard (Game Director and Narrative Director, respectively, at Asobo) and the actor, Roger Clark (Red Dead Redemption 2), are some of the international guests who will take part in the VIT Talks 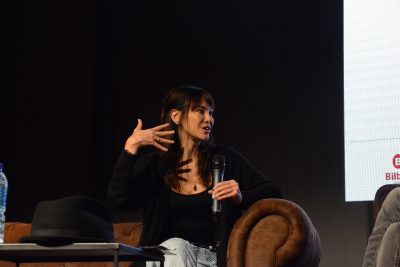 A meeting forum for sharing ideas and reviewing the careers of some of the most important names in the industry. The VIT Talks constitute the most informative dimension of the Bilbao festival, Fun & Serious. The ninth edition of the Talks, which are due to take place this year on December 8, will host the presence of a number of outstanding figures of diverse profile: developers, businessmen and managers, composers, actors, writers and various heads of leading development studios.

Within the framework of the program, we might mention the meetings with this year’s four Honorary Award-Winners: the composer Yoko Shimomura (to whom we owe some of the most memorable videogame soundtracks, ranging from his arrangements for Street Fighter II to iconic titles such as Super Mario RPG, Parasite Eve and the Kingdom Hearts saga, together with Disney and Square Enix, a spectacular work that brought him worldwide fame); Bruce Straley (Game Director for Naughty Dog up until 2017, where he was responsible for titles as important as the different installments of Uncharted and The Last of Us, and who now experiments with scenic proposals that mix immersive theater and virtual reality); Tim Willits (former Director of id Software and Creative Director of Saber Entertainment, whose name is inextricably linked with the sagas Doom, Quake and Rage); and Greg Street (former Design Manager for World of Warcraft at Blizzard and, since 2014, one of the most important figures at Riot Games, a development company which, on its Tenth Anniversary, has announced five new titles, all under Street’s responsibility, in his capacity as the company’s Vice President of Intellectual Property and Entertainment).

For his part, the writer and director Sam Barlow (Aisle, Silent Hill: Shatter Memories, Her Story) will explore the limits of interactive narrative, as he usually does in his most notable titles, and he will address the issue of merging film and video games, in the style of his latest thriller, Telling Lies.

Two of the heads of the logical adventure set in the fourteenth century, A Plague Tale: Innocence, one of the great revelations of the year, will analyze this title and other proposals from the French studio, Asobo: Kevin Choteau, Game Director, and Sbastien Renard, Narrative Director, will explain the keys to this game, which follows the vicissitudes of two brothers trying to escape the Inquisition in a hostile and heartbreaking France, one plagued by rats.

The VIT Talks Program will also include meetings with dubbing actors such as the American, Roger Clark (New Jersey, 1981), whose unforgettable performance in the skin of the character, Arthur Morgan, the star of Red Dead Redemption 2, earned him one of the last Game Awards, as well as three other nominations (BAFTA, New York Game Awards and NAVGTR). We might also mention the Spaniard, Claudio Serrano (a memorable Batman and the voice of several of the most recognized heroes for Spanish console players, and currently a Professor on the Voice-Over Master’s Degree at Rey Juan Carlos University in Madrid).

Similarly, representatives from the leading studios on the Spanish scene will participate in meetings and roundtables, including the following: Raul Rubio (CEO of Tequila Works, about to launch two titles: The Groundhog Day and GYLT); the CEO and screenwriter of the Valencian studio, Deconstructeam, Jordi de Paco; and the Creative Director and founding partner of the multi-award-winning Bilbao studio, Delirum Studios, Arturo Wallet (Alice’s Rivers, The Creative Delusions of Von Sottendorff and His Squared Mind).

The goal of the now traditional VIT Talks is to share knowledge and inspiration. It provides a meeting forum to discuss and analyze creative and business trends for the videogame sector and other arts and, as occurs every year, it will present a number of top-level speakers.

For its part, the Fun Zone, the 16,000 sq.m. set aside for gaming, will make up the most entertaining section of the Fun & Serious Festival. Some 400 games in the BEC! devoted to the latest developments and esports tournaments, such as the ION Dragon Circuit Finals (FIFA and CSGO), will complement other now classic proposals such as the Retro Zone, a space for more vintage gaming technology, and the Manga Zone, devoted to Japanese culture.

This area, which will feature the largest Fortnite competition arena ever created, in addition to 80 gaming stalls for sports titles, will also host a ‘meet & greet’ with the content creators of the Waldo Squad, featuring names such as Wismichu, Leviathan, Miare, Calabuth and Orslok, among others.

The main course in this area will revolve around the Ibainfico Tournament (December 7 and 8): featuring competitions of various video games such as League of Legends and the most varied and bizarre trials, this Tournament will set two teams against each other according to the model of the veteran television program, Grand Prix. The mayors, on this occasion, Carlos ‘Ocelote’ Rodrguez and Willyrex, will attend with a cohort of influencers of enormous impact. The goal is to multiply the 80,000 euros raised in 2018, which this time will go to the NGO, Save the Children.

At its ninth edition, Fun & Serious has consolidated its status as a must-attend event on the European cultural calendar, a festival that, with 35,000 participants at its last edition, constitutes the largest of its kind in Europe. Its motto: to elevate the videogame to the category of an art, such as cinema, literature or theater. This industry featured a turnover of 1,530 million euros in Spain in 2018, 12.6% more than the previous year, according to data from AEVI.

The Fun & Serious Game Festival, to be held from 8 to 11 December in Bilbao, is the largest video-game festival in Europe and a key meeting-point for the industry as a whole. Last year, more than 30,000 people attended the different activities at the festival in Bilbao.

The event’s mission is to recognize and promote the work of video-game producers, directors, artists and developers, based on a comprehensive program of conferences, roundtables, networking and activities, aimed at both companies and the general public. As is customary each year, the Festival will conclude with an exclusive Grand Prize-Winning Gala for the best video-games of the year.

The Fun & Serious Game Festival enjoys the support of the Basque Regional Government SPRI, Bilbao City Hall and the Provincial Council of Biscay. The event’s strategic partners include Microsoft, PlayStation and Ubisoft. The Festival features the collaboration of the Spanish Video-Games Association (AEVI), UTAD, Virtualware and Digipen.