The Finalists of the Fun & Serious Titanium Awards: the top of t - TulsaCW.com: TV To Talk About | The Tulsa CW

The Finalists of the Fun & Serious Titanium Awards: the top of the International Creative Scene

Remedy's action-adventure shooter, Control, has the highest number of nominations, six, while the French title set in Medieval times, A Plague Tale: Innocence (Asobo) and Kojima's latest proposal, Death Stranding, follow closely behind with five nominations each These three titles will be competing for the Best Game of the Year with Sekiro: Shadows Die Twice and Star Wars: Jedi Fallen Order (both with three nominations in different categories) 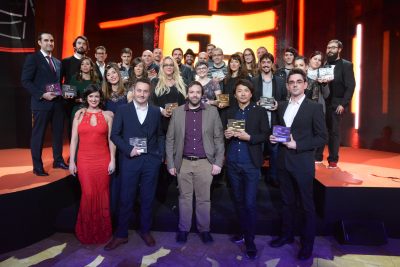 The Fun and Serious Game Festival has just announced the 16 Titanium nominees that will compete this December in various categories to be recognized as the best video games of 2019. The list includes essential titles, several revelations of the year and some surprises, both from the national and international scenes. We will have to wait until December 9 to discover the winners at the Festival’s closing ceremony. That same night, four icons from the industry will receive their Honorary Titanium Awards: the Japanese composer Yoko Shimomura (Kingdom Hearts); the former Creative Director of Naughty Dog, Bruce Straley (Uncharted, The Last of Us); the former director of IdSoftware, Tim Willits (Doom, Quake, Rage); and the Intellectual Property VP of Riot Games, Greg Street (League of Legends and five other new recently-announced games). Historically, the Honorary Titanium Awards have brought together genuine industry legends such as Jeff Kaplan, Jordan Mechner, Tim Schafer, Yuji Naka, Alexey Pajitnov, Warren Spector, Peter Molyneux, Brenda Romero, Jade Raymond and Fumito Ueda.

Control, a shooting and action-adventure video game developed by Remedy Entertainment and distributed by 505 games, is the title with the highest number of nominations, six [Game of the Year, Best Art, Best Game Design, Best Narrative Design, Best Adventure Game and Best Soundtrack].

This game is followed closely behind by two titles that, despite their diametrically opposed settings Medieval France and the futuristic dystopia in which Sam Porter Bridges operates -, both share a dark atmosphere and outstanding creativity. Asobo’s huge revelation, A Plague Tale: Innocence, and Kojima’s latest acclaimed proposal, Death Stranding, have both been nominated for five Titaniums.

Other favorite titles of the Jury that has prepared the shortlist of Finalists include: Sekiro, featuring the disfigured warrior, the one-armed Wolf, who faces a number of Samurai in the leading role; Luigi’s Mansion 3; Star Wars Jedi Fallen Order; and the Spanish title, Blasphemous [all four titles have three nominations each]

The game featuring the famous plumber who explores a haunted hotel is one of the five candidates to win the Titanium for Best Artistic Design, alongside Control, A Plague Tale and the Spanish titles, Gris and Blasphemous.

The quartet of games that will be competing for Best Game Design includes four of the leading candidates: Control, Sekiro, A Plague Tale and Star Wars Jedi Fallen Order.

While the predictions for the Titanium for Best Narrative Design include Control, Death Stranding and A Plague Tale, two other titles have been very well received by the critics: the platform video game, Life is Strange 2 (Dontnot, Square Enix), and Telling Lies, a narrative video game that involves a hunt for liars, created by Sam Barlow.

In addition, the Best Indie Title of the Year will be selected. In this category the nominees include: Blasphemous, Elysium Disk, Baba Is You, Untitled Goose Game and Wargroove.

The Titanium Awards will also recognize the Best Development in Spain of 2019, a category that features five finalists: Blasphemous, Blacksad, Gris and They Are Billions.

The candidates for Best Soundtrack include: Jonathan Eng Sayonara for Wild Hearts; Casey Edwards for Devil May Cry 5; Petri Alanko for Control; Yoko Shimomura for Kingdom Heart 3 and

The Best Performance in Spanish will be decided between Carlos di Blasi, who brings to life the dark Sam Porter Bridges in Death Stranding; Claudio Serrano, the voice of Deacon St John in Days Gone; Gabriel Jimnez, who plays John Blacksad in Blacksad Under The Skin; Olga Velasco, in the role of Kait Diaz in Gears 5; and Guillermo Romero for Nomad in Ghost Recon.

Furthermore, at the Festival’s Closing Ceremony, the Titanium for Best Serious Game (a direct prize) will be presented, together with the FS Play Award for Most Innovative Title and Award for Best Basque Game. Finally, the winner of the BBK New Talent Award will be decided, a prize endowed with 3,000 euros that recognizes the quality projects presented by university students and training centers. Entry registrations for the New Talent Award can still be made via this link.

Here is the complete list of games that will compete to win each of the categories at the Awards Ceremony of the Fun & Serious Festival, which will take place at the Guggenheim Museum in Bilbao on December 9, 2019:

Game of the Year

A Plague Tale
Life is Strange 2

Indie Game of the Year

FS Play to the Most innovative Game

The Longest Road on Earth

A Place for the Unwilling

The Longest Road on Earth

The Fun & Serious Game Festival, to be held from 8 to 11 December in Bilbao, is the largest video-game festival in Europe and a key meeting-point for the industry as a whole. Last year, more than 30,000 people attended the different activities at the festival in Bilbao.

The event’s mission is to recognize and promote the work of video-game producers, directors, artists and developers, based on a comprehensive program of conferences, roundtables, networking and activities, aimed at both companies and the general public. As is customary each year, the Festival will conclude with an exclusive Grand Prize-Winning Gala for the best video-games of the year.

The Fun & Serious Game Festival enjoys the support of the Basque Regional Government SPRI, Bilbao City Hall and the Provincial Council of Biscay. The event’s strategic partners include Microsoft, PlayStation and Ubisoft. The Festival features the collaboration of the Spanish Video-Games Association (AEVI), UTAD, Virtualware and Digipen.