Romaire Studios' Custom, Life-Sized Cajun-Christmas Display to Light Up the Spirit of Morgan City Shrimp Boat on Nov. 28 at 6 p.m. 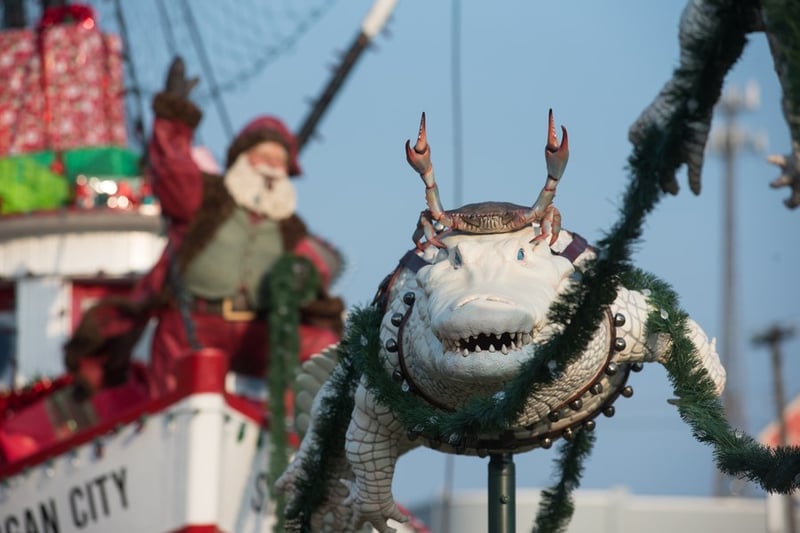 MORGAN CITY, LA, November 22, 2019 /24-7PressRelease/ -- When Emmy-Award winning artist Lee Romaire decided to give back to his hometown for the holidays, he did it with a festive flair unique to his Louisiana roots: Cajun Christmas. On Nov. 28th, life-sized Cajun Santa Claus will be commanding the Spirit of Morgan City shrimp trawler – the city's classic icon. Led by his three, 10-foot-long "reingators" with blue-crab antlers, Santa and his crew of 10 multi-ethnic elves haul new oversized presents on board. "We were very excited that so many people in the community came to see the new display last year," says Romaire, whose namesake studio creates live-action creatures, characters and animated props for the entertainment industry. "Cajun Christmas got a lot of great PR and the 'reingators' went viral. I'm hoping more media coverage this year helps boost Morgan City tourism."

What makes this display uniquely Louisianan? Start with the Christmassy white alligators, a rare type that were first discovered near Morgan City. The "reingator's" antlers are Louisiana blue crabs and the lead gator with the red, light-up snout is, appropriately, "Rouxdolf." With the shrimp trawler as his sled, Santa wears shrimper boots and a coat trimmed with brown, faux muskrat fur. The elves sport tiny shrimper boots, instead of elf shoes, and top off their unique look with white, shrimp-tail caps. The new fiberglass presents – designed to withstand wet weather – are decorated with whimsical sketches of Mardi Gras snowmen and blue crabs in Santa hats.

High-tech techniques
A year in the making, these detailed characters were created by Romaire Studios in Los Angeles using high-tech digital sculpting tools and computer-aided routing – as well as 3D printing – for the gators. "I collaborated with digital designer Bryan Wynia to design a stylized alligator that I had in my mind – it had a bit of an underbite and a fatter body than a typical alligator," says Romaire. "From that initial design, we were able to create all three reingator sculptures just by changing proportions and poses." After getting the details just right – down to digitally sculpting each scale one at a time – the team took the designs off the screen and into the computer-driven, 5-axis CNC mill to carve the bodies out of foam.

The baby gator's head was particularly tricky since he would become "Rouxdolf" – complete with glowing red nose – leading Santa through the bayou! "We used digital tools to 3D-print three different sizes of his head, which allowed me to choose which was proportionally correct," says Romaire.

For Santa? Romaire was hands-on and sculpted him from traditional clay. (Fitting since he is the first person outside of The Walt Disney Company to sculpt a president for Walt Disney Imagineering—Abraham Lincoln for Disneyland's Great Moments with Mr. Lincoln.) "I sculpted Santa's face, and sculptor Russ Lukich completed the beard for me," says Romaire. The team used a different technique for the rest of Santa. "We fabricated his body using actual clothing so we could get natural folds, then coated it with fiberglass," says Romaire. "I did it to give the sculpture movement."

"We cannot thank Lee Romaire and Romaire Studios enough for this tremendous contribution to Morgan City," says Mayor Frank "Boo" Grizzaffi. "It truly reflects Christmas in our city and has brought many people and tourists to our beautiful river-front area. Our residents love it and the tourists do, too!"

Click here for "making of" photos and video from Romaire Studios in Los Angeles, CA, plus daytime shots and twilight photos from Morgan City. Lee Romaire is available for in-person interviews in Morgan City Nov. 23 – 28.

The Cajun Christmas display lighting ceremony is Nov. 28th at 6 p.m.; Brashear Avenue, cross street Federal Ave., Morgan City. The display will be on board the Spirit of Morgan City until early January.

To see more behind-the-scenes pictures and video about the making of these custom sculptures, follow @RomaireStudios on Facebook.

About Romaire Studios
Los Angeles-CA based Romaire Studios, Inc. (RS) is one of the foremost providers of live-action creatures, characters and animated props for the entertainment industry. Founded in 2000 by Emmy-Award winning artist Lee Romaire, RS leverages Lee's sophisticated artistic eye and passion for realism and performance.

Our success in the industry is based on integrity, quality, a fluid and collaborative environment created by and for our artists/performers/engineers, and precise project management resulting in timely delivery. A decade ago, RS set the standard for movie-quality realism and, soon thereafter, breakthrough performance fidelity in theme park animatronic figures. Today, we continue as an innovation leader because: we bring art and technology to life. Learn more at romairestudios.com

For the original version on 24-7 Press Release Newswire visit: https://www.24-7pressrelease.com/press-release/468039/romaire-studios-custom-life-sized-cajun-christmas-display-to-light-up-the-spirit-of-morgan-city-shrimp-boat-on-nov-28-at-6-pm