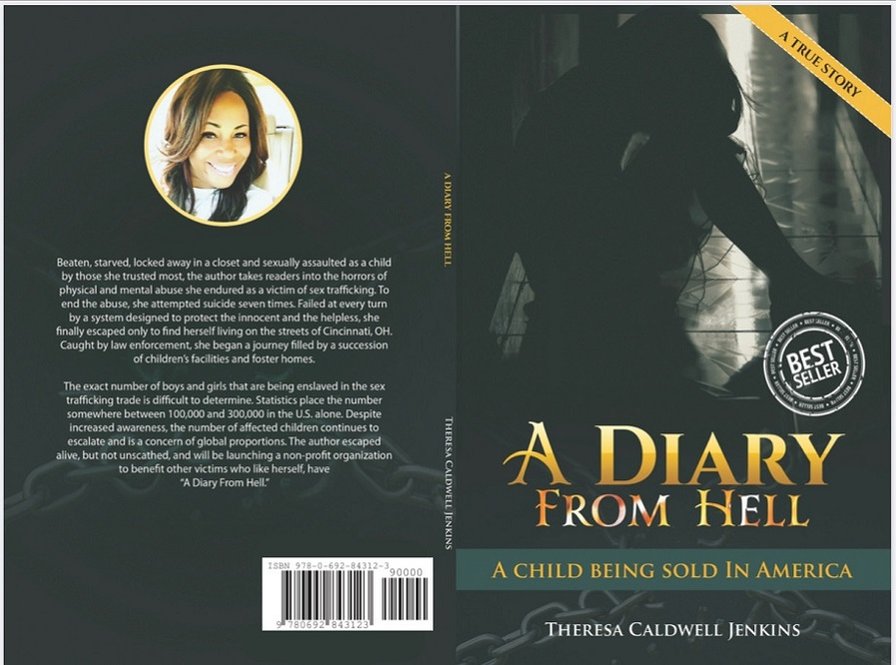 Author Theresa Caldwell Jenkins announced that her new book, "A Diary From Hell: A Child Being Sold in America," will be available exclusively on LuLu.com on November 21, 2019. Available for print, it chronicles her terrifying childhood as a victim of sex trafficking.

"Child sex trafficking is a crime that perpetrators take great pains to hide," said Jenkins. "It's a crime that robs children of their innocence and it needs to be brought into the light."

"A Diary From Hell" is Jenkins' true story of lost innocence at the hands of the adults in her life that she trusted the most. The author takes readers into the world of horrors she endured for years, a sex slave with no voice or hope.

Jenkins was enslaved and abused mentally, emotionally, physically and sold for sex. She was kept in a closet, beaten daily, and sometimes allowed to eat. She was left in the care of a family member who began selling her young body to men for sex.

The abuse continued into her adolescence and while other youngsters were playing and planning parties, Jenkins was locked in a daily hell. A child welfare system designed to protect children failed her numerous times and she was sent back to live with her abusers.

By the time Jenkins was 11, she'd attempted suicide seven times to escape the horror of human trafficking. Left with no other option, she ran away and lived on the streets of Cincinnati, OH. She was eventually caught and became a child of the welfare system, being shuttled among a series of children's homes and foster homes.

Jenkins has now established Hauts Talon Rouges, a non-profit organization founded in the Washington, D.C., Maryland and Virginia area that helps victims of sex trafficking, and individuals within the LGBTQ community, and those who want to escape the adult entertainment industry. She has worked with the Greater DC Chapter of the National Action Network and has spoken to over thousands about putting an end to human trafficking. She was the keynote speaker at Rowan University in Glassboro NJ, hosted by The New Jersey trafficking coalition, Covenant House in Washington D.C. and The College of Southern Maryland's Social Injustice day. Pannel discussions with The NAACP of DC, Mayor for Greater Economic Opportunity DC chapter and DC Federation of Democratic Women.

Jenkins' new book, "A Diary From Hell: A Child Being Sold in America," is a first-person account that takes readers into the nightmarish world of child sex trafficking. Through her book and Hants Talon Rouge, she's working to provide help and hope for victims of sex trafficking. The book can be pre-ordered on her website at

Theresa Jenkins is the author of "A Diary From Hell: A Child Being Sold in America," and the founder and president of the non-profit organization, Hauts Talon Rouges( French for Red High heels) She's in high demand as a speaker and appears at a variety of events throughout the year.

This article was originally published by IssueWire. Read the original article here.