The Spectacular Mad Hatter Holiday Festival, Parade & Tree Lighting Celebrates it's 10th Year for the City of Vallejo where the Fabled Wonderland will Emerge from the Rabbit Hole in the Historic Downtown 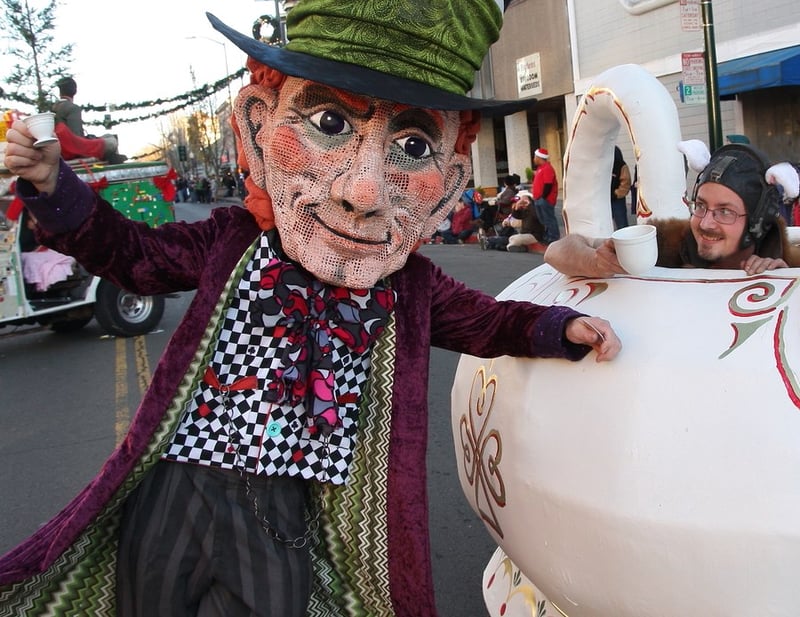 California's most whimsical and enchanting festival of wanderlust and fantasy attracts thousands to the historic downtown with its awe inspiring fire-shooting Wonderland recreations that turns the city into a fantasy world for children and adults.

VALLEJO, CA, November 25, 2019 /24-7PressRelease/ -- Celebrating the Mad Hatter Holiday Festival's 10th year anniversary with all of Wonderland's friends from the Mad Hatter, the Cheshire Cat, the Lion King and the White Rabbit as well as the rare appearances of award winning mutant mobile creations, designed and featured for the playa of the Burning Man Festival, of Chester the Firing Pony, Rhino Redemption, a firing G-Nome, a lighted space ship and the Red Queen's firing dragon Jabberwock.

Celebrating a decade of the Mad Hater Holiday Festival, Parade & Tree Lighting will be the Queen's Court as the start of the procession for the Mad Hatter Holiday Parade of Alice's Adventures in Vallejo's Wonderland.

The Queen's Court will be filled with many of the entertaining dancing groups and fanciful Tea Party participants including the Tea Party's characters and roving furniture as well as groups dancing salsa, waltz and swing with a surprise appearance of the dancing fairies. The Queen's Court starts at 3:30 PM and the Mad Hatter Holiday Parade will follow at 4:30 PM.

501 Garrison Storm Troopers and marching bands will lead the Mad Hatter Holiday Parade along with CAL Maritime Cadets and three more marching bands in full regal. The VW Beetle replica from the motion picture "Bumblebee" will light up in the parade and interact with the public on the festival grounds. There will be lighted creations of lady bugs, Christmas Pickle, Hookah Smoking Caterpillar, Jingle Jenny and the Rhino Beetle among many more that'll be coming out of the Rabbit Hole.

Festival activities start early at 12 noon with the "Marin Street Holiday Market" and the inflatable Unicorn Park along with children rides below Sacramento Street. At 2:00 PM on the festival grounds by Unity Plaza the Robotic Jurassic Park becomes alive as well as added children train rides.

The Mad Hatter Holiday Festival, Parade, and Tree Lighting is held on Saturday, December 7, 2019 with happenings throughout the festival and its surrounding areas: a Marin Street Holiday Market, Scrooge the Musical at Bay Area Stage Productions, a Mad Hatter Beer & Wine Pub, an inflatable Unicorn Park, a robotic Jurassic Park, an interactive Wonderland Square, an international food court and to warm up there will be hot chocolate and coffee to watch the lighting of the tree and view the lighted boat parade on the promenade along the Waterfront.

Another highlight following the week after on Sunday, December 15, 2019 is the Grand Victorian Home Tour, with the reception at a World Classic Car Museum in downtown Vallejo. Be surrounded by Rolls and Bentleys while feasting on an array of foods and delights with a glass of Godfather Winery's best prohibition wines. Then start the Victorian holiday tradition going from grand home to grand home that ends at a Commodore's mansion on Mare Island, now home to Godfather Winery (Wonderland hotline: 844-344-8793)

Award winning Burning Man Fire Shooting mobile creations of horses, dragons, mushrooms, and ponies illuminate Vallejo's downtown streets in the Mad Hatter Holiday Festival. Are all part of the Hatter events throughout the City of Vallejo.

Hatter events are produced by Hyperion Community Partners LLC, which co-produces festivals and events with the City of Vallejo. The Mad Hatter Holiday Festival, Parade & Tree Lighting, the Hatter's July 4th Waterfront Celebration, and in partnership with the Solano County Fairgrounds a mini-Mad Hatter Parade as well as a Wonderland Travelers Bazaar and interactive journey.

You Tube video produced by WhatSF, a weekly television program that aired in San Francisco has a growing viewership of over 100,000: https://youtu.be/jN6MhLHYFrI

For the original version on 24-7 Press Release Newswire visit: https://www.24-7pressrelease.com/press-release/467763/the-spectacular-mad-hatter-holiday-festival-parade-tree-lighting-celebrates-its-10th-year-for-the-city-of-vallejo-where-the-fabled-wonderland-will-emerge-from-the-rabbit-hole-in-the-historic-downtown