Open for more than a year, Rocky Mount Event Center is a finalist for Best New or Renovated Venue 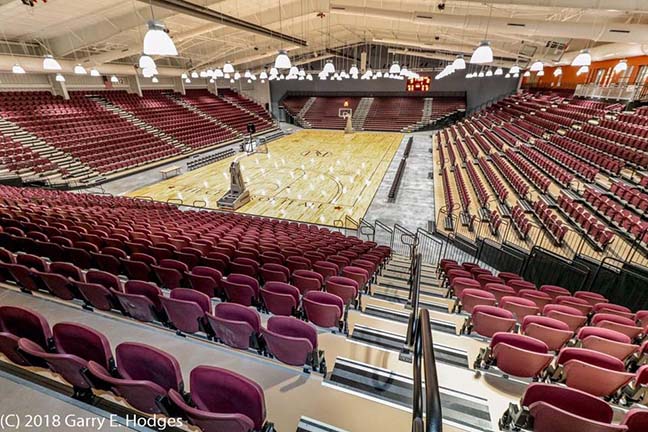 On the heels of celebrating its one-year anniversary, Rocky Mount Event Center has garnered the attention of the sports tourism industry’s top associations. In November sports destinations, venues, service providers, vendors, and publications gathered at TEAMS (Travel, Events and Management in Sports) the world’s largest gathering of event organizers and travel planners from the sports industry. During the conference hosted by SportsTravel, an award ceremony was held to present the SportsTravel Awards to winners in six categories. Among the finalists in the Best New or Renovated Sports Venue category was the state-of-the-art facility, Rocky Mount Event Center, part of the SFM Network.

Rocky Mount Event Center garnered national attention early on due to the size of the project. The city of Rocky Mount crafted a vision in partnership with several stakeholders, including Dev Pathik, co-founder and CEO of the Sports Facilities Advisory and Sports Facilities Management (SFA & SFM) to position itself as a sports tourism, entertainment and events destination to bring this 165,000 square foot facility to life. In addition to doing work like market studies, on-site planning and financial forecasts, SFA worked with the Opportunities Industrialization Center of Rocky Mount to open an urgent care clinic within the facility. Pathik says SFA also helped secure new market tax credits, a federally backed incentive that supports underserved communities.

“Rocky Mount Event Center is more than a sports venue; it is a destination ideally suited to host events of any kind,” said Pathik. “The success of the facility in its first year is a testament to the collaboration of the city, facility staff, and local patrons of Rocky Mount. By creating a venue that’s valuable to the local community, while also being convertible into a youth sports and events destination, we have found a formula that really works.”

The vision for Rocky Mount generated $4.25 million dollars of direct investment in the first 60 days of the project. This included real estate purchases in the downtown area, encompassing a total of 200,000 square feet by multiple investment groups, as well as reinvestment from the local community. Today Rocky Mount Event Center is exceeding their booking pace over projections. In 2019 a total of 125 sports and other events were booked, exceeding the projected 108 events for this year.

“As Rocky Mount celebrates their first year of opening, the entire SFM Network celebrates this recognition with their team,” says co-founder and CEO of SFM, Jason Clement. “We created the SFM Network with the vision to be the first nationally recognized system of top-performing facilities. Rocky Mount is no exception and it has set the standard for the 14 other venues in the Network. Several projects opening in the next six months, including The Community First Champion Center, Cedar Point Sports Center, and Sand Mountain Park, are all equipped to produce similar results and return to the SportsTravel awards as winners in 2020.”

To learn more about SFA and SFM or to book with Rocky Mount Event Center visit: sportadvisory.com or sfmnetwork.com.

The SFM Network is the single largest and fastest-growing network of sports tourism venues in the country. We are an unparalleled network of events, destinations, vendors, talent, and analytics. SFM Network is just one part of the Sports Facilities Management, LLC. (SFM). Alongside our sister company, the Sports Facilities Advisory, we’ve worked in over 2,000 communities around the world. SFA specializes in planning and funding services for new and emerging projects and has been an industry leader since its founding in 2003. To learn more about SFM Network, visit sfmnetwork.com or sportadvisory.com