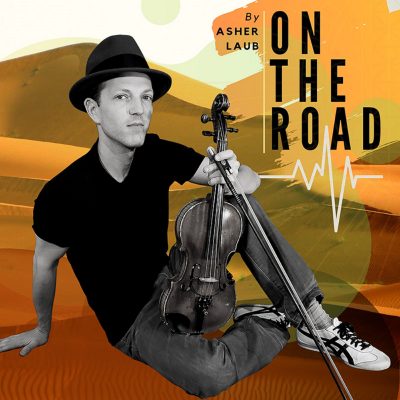 Asher Laub continues to push his own boundaries with the upcoming release of his new single “On The Road.”

Since the age of 2, artist Asher Laub has been classically trained in violin. By the age of 13, he participated in his first formal concert with the Buffalo Philharmonic. Since then, the New York-based artist has poured himself into multiple genres, emerging as a groundbreaking electronic violinist. As he grew creatively, Asher headlined at major venues such as Madison Square Garden, Carnegie Hall, on PBS and across 4 continents.

Asher faced nightmarish health challenges that impacted his mobility in 2014. Not one to accept defeat, he pushed through to rebuild his musical skills to an all-new high and reinvented himself as a dancing violinist. His recently released single, “Neon Dreams“, has already reached 300 thousand streams on Spotify and almost 200 thousand views on YouTube.

“On The Road”, the newest single from this high-energy performer, embodies the powerful message he symbolizes in finding solace in one’s own ability to rise above challenges, be it physical or otherwise. The instrumental single will take his audience on a sonic journey through the multitude of ups and downs Asher has encountered over the years. All of the driving forces which have shaped him will envelop his listeners as they experience “On The Road”; feelings of hope, reflective calm, beauty, turbulence, mourning, and joy.

Go to Asher Laub’s website for news and updates and check out his latest single "On The Road."

Asher Laub is a Long Island, New York-based electric violinist, electronic producer, and high energy performer. He holds three advanced degrees in the sciences from New York University and was a full time science teacher for four years in the New York Department of Education. Asher’s notable music career began with classical violin training at the age of 2, eventually leading to his first formal concert with the Buffalo Philharmonic at the age of 13. Now, with a growing fan base of his very own, Asher is working to influence societal norms and conventional thinking about music performance. In 2014, he confronted health issues that could potentially be life-altering, particularly for a musician, and used that as an opportunity to reinvent himself. During this time, Asher learned to merge hip hop, pop, rock, EDM and other genres with breakdancing and acrobatic choreography. His latest single, “Neon Dreams”, was released by Kobalt Music Group across all music platforms and has been described as a “high-octane hit.” Follow Asher on YouTube, Spotify, Instagram and Facebook. Check out his website for news and updates.

AMW is an award-winning marketing, communications and entertainment group.