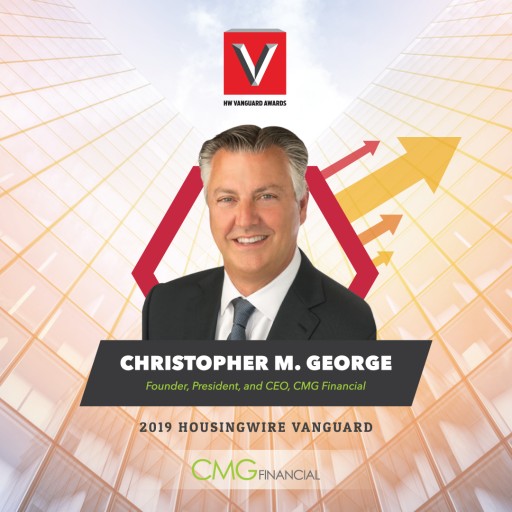 SAN RAMON, Calif. - December 4, 2019 - (Newswire.com) - Christopher M. George, founder, president and CEO of CMG Financial, was honored as a 2019 HousingWire Vanguard. For its fifth annual list, HousingWire recognized select housing finance executives who have demonstrated outstanding leadership and service to the industry. The Vanguards were chosen by HousingWire’s editorial board based on their accomplishments in the last 12 months, both within their respective companies and the housing sector they represent.

"HousingWire's Vanguards represent the most inspirational leaders, builders, and shapers of the housing industry," HousingWire Associate Editor Kelsey Ramrez said. "It is one of the most distinguished awards in housing and personifies the executives that are raising the bar for this industry and taking it to new heights.”

While serving as president and CEO of CMG Financial for the past 26 years, Mr. George has concurrently advocated on behalf of the consumer and the lender for responsible lending practices and a competitive mortgage market. In the past year, he oversaw the addition of 40 new retail branches which contributed to a 40% growth in year-over-year production. Under his leadership, the company has evolved and thrived regardless of the rate environment. In 2018, CMG Financial was ranked as the 15th overall top-producing lender by Scotsman Guide. Each of the company’s origination channels Retail (20th), Wholesale (7th), and Correspondent (6th) were ranked individually as well.

CMG Financial maintains a customer-centric focus and is committed to making homeownership more accessible for all buyers, under the guidance of Mr. George. In 2005, the company launched the All in OneTM, an innovative loan that lowers total interest paid and speeds up repayment by combining your mortgage with your checking account. In 2017, HomeFundItTM was launched to address the most pervasive problem today’s home buyers face the inability to save for a down payment. HomeFundIt enables and streamlines down payment gifting so friends and family can contribute toward the down payment.

In addition to his service to the mortgage industry, Mr. George is dedicated to giving back to the community through his charitable organization. In 2012, he founded the CMG Foundation to support nonprofit organizations through ongoing fundraising efforts and an annual Wine Tasting and Charity Auction. The CMG Foundation has raised millions for its beneficiary groups, including the Gary Sinise Foundation, the Cancer Support Community, and the MBA Opens Doors Foundation.

CMG Financial is a well-capitalized, privately held mortgage-banking firm founded in 1993. The company makes its products and services available to the market through three distinct origination channels including Retail Lending, Wholesale Lending, and Correspondent Lending.