"The World Has Gone Mad and the System is Broken" - TulsaCW.com: TV To Talk About | The Tulsa CW

"The World Has Gone Mad and the System is Broken" 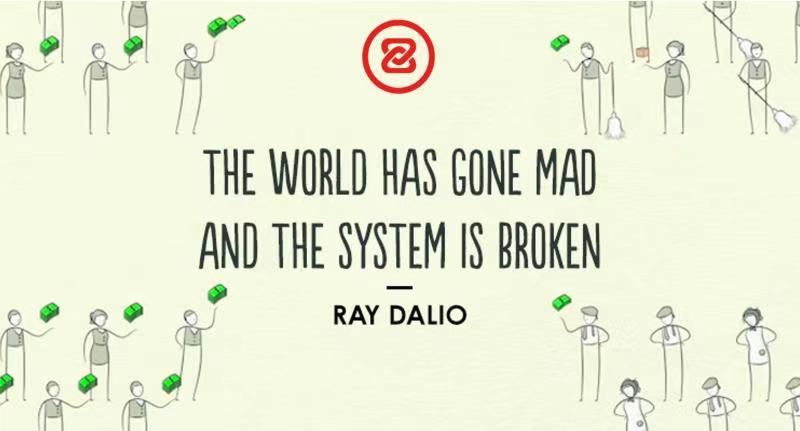 AMERICA, December 5, 2019 /EINPresswire.com/ -- Ray Dalio, the founder and leader of the most significant hedge fund assets under management with more than $100 billion under management, has recently written a note on the popular business social network, LinkedIn.

His firm, Bridgewater Associates, was present and created by Ray Dalio in 1975. It is a notable firm because it works with entities such as foundations, various governments, and even endowments all across the world. The firm is also one that will work with central banks providing it with a unique view on the world and how it works.

In addition to these other critical points, Bridgewater Associates uses what is known as a global macro strategy to allocate funds to different companies. These strategies include close attention to the money supply, foreign exchange movements, growth or declines in GDP and GNP, in addition to other events that may influence the strength and positions of companies in the world.

The firm started had a key focus on institutions and advising them on strategic allocations of investment.
It is easy to see why the firm is precisely where it is and why many investors and experts pay attention when Bridgewater Associates talks about macroeconomic conditions.

Indeed, the note made a significant impression on people on social media sites such as Twitter, Facebook, and other mediums and is something to talk about today.

Let us take a look at the note, understand what it is about and how it relates to macro bitcoin investing strategies.

Free Money and The After Effects

Dalio comments that money is free for those with proper credit status. In fact, those who fall into an appropriate creditworthy state can take advantage of the fact that lenders and investors may not want the total initial principal back as in regular dealings.

Of course, this is startling and doesn’t make any sense. One would wonder, why would the giver of the capital act in such an irrational manner?

The author of the piece notes that they are willing to do so because of the excessive and abundance of money that continues to grow in their accounts. According to the author, central banks continue to push more money on these investors to increase economic activity and contribute to rising inflation.

Dalio argues that these efforts are not stimulative due to a lack of expenditures, and instead, an increase is present in investments.

Recent events confirm this lack of progress. Institutions such as the International Monetary Fund and others have commented on slow economic growth in the present and the future. The United States economy continues to grow at a slower level. The Bureau of Economic Analysis notes that real gross domestic product to 1.9% in the second to last quarter of 2019. The motor industry continues to decline, and manufacturing in the United States has been subpar overall.

Even more pressing concern is that economic expansion is not looking well all over the world. Signs of a contraction continue to occur in Hong Kong, the United Kingdom, Germany, Italy, and other countries such as Brazil.
A synchronized slowdown is surely occurring within the world today.

Asset Prices Go Up but Increasing Chances of Long-Term Downsides

One general trend of these central banks fueled stimulus efforts is that financial assets continue to go up in value regularly.

Dalio agrees and notes that the venture class of assets and private equity should have a wide range of present and future returns. He comments that due to the lack of accurate price visibility in private equity or venture capital, “their expected returns are left to investors’ imaginations.”

Ray Dalio goes on to state that “because investors have so much money to invest and because of past success stories of stocks of revolutionary technology companies doing so well, more companies than at any time since the dot-com bubble don’t have to make profits or even have clear paths to making profits to sell their stock because they can instead sell their dreams to those investors who are flush with money and borrowing power.”

It is interesting times that we live in today and different forms of irrationality in these private markets.
Firms such as Docusign, Uber, Peloton, Lyft, Pinterest, Snapchat, and other companies continue to stay unprofitable and will likely continue that way into the near future.

The Bridgewater founder argues that a large swath of these companies are able to do so and thrive because there is “now so much money wanting to buy these dreams that in some cases venture capital investors are pushing money onto startups that don’t want more money because they already have more than enough; but the investors are threatening to harm these companies by providing enormous support to their startup competitors if they don’t take the money.”

A few companies such as WeWork have risen in this environment but seen their valuations fall drastically. Asset value inflation might have been a boon for investors in the short term. That is surely a positive for investors in the present but undoubtedly not in the future. The issue is that assets will only have so much to give if substantially inflated in the present. Corporations such as Morgan Stanley note that traditional investment portfolios are unlikely to outperform or meet benchmark expectations over the next decade.

These firms agree with Dalio and state that traditional investment portfolios could suffer drastic drawdowns and return negligible value over the coming decade. Annual returns on traditional portfolios may fall below 3% on a yearly basis. There is a veritable cocktail of factors that show probable flattening yields for the next decade. These factors include the real notion of a global slowdown in overall economic growth and general chances of declining yields.
Morgan Stanley noted to their consumers that “investors will need to accept much higher volatility to eke out small incremental units of return."

It is not just equities that bound to suffer from these low yields but bonds as well.

Reports indicate that "US equities expected returns are dragged down by a combination of lower-income return, low inflation expectations, and penalties on both higher-than-average valuations and above-trend growth that cannot be sustained for the next decade” according to analysts.

So, what are investors to do in these uncertain times? Turn to sound money.

The Rise of Bitcoin

In an uncertain environment such as this one, more investors are expecting more returns from emerging asset classes such as bitcoin. Investors are looking for answers and yield in a time where savings are not prioritized, and savers experience a minimal return on cash holdings. It is in such an environment where individuals are likely looking to park their money in vehicles that are not correlated to the traditional financial system.

The world is at an interesting corner right now regarding monetary policy and fiscal policy. Tried and true methods have led the world to where it is today and is still not working as it should in the current environment. Investors must seize opportunities, aim to look for opportunities in emerging asset classes, and construct alternative portfolios for further growth.

ZB Group was founded in 2012 with the goal of providing leadership to the blockchain development space and today manages a network that includes digital assets exchanges, wallets, capital ventures, research institutes, and media. The Group’s flagship platform is ZB.com, the industry leading digital asset exchange. The platform launched in early 2013 and boasts one of the world’s largest trading communities.

ZB Group also includes ZBG the innovative crypto trading platform, and BW.com, the world’s first mining-pool based exchange. Other holdings include wallet leader BitBank, as well as exchange brands ZBM, ZBX and Korea’s Bithi.
Industry intelligence and standards are headed by the recently launched ZB Nexus who embody the core values of ZB Group and open source their reports and analysis for the public.