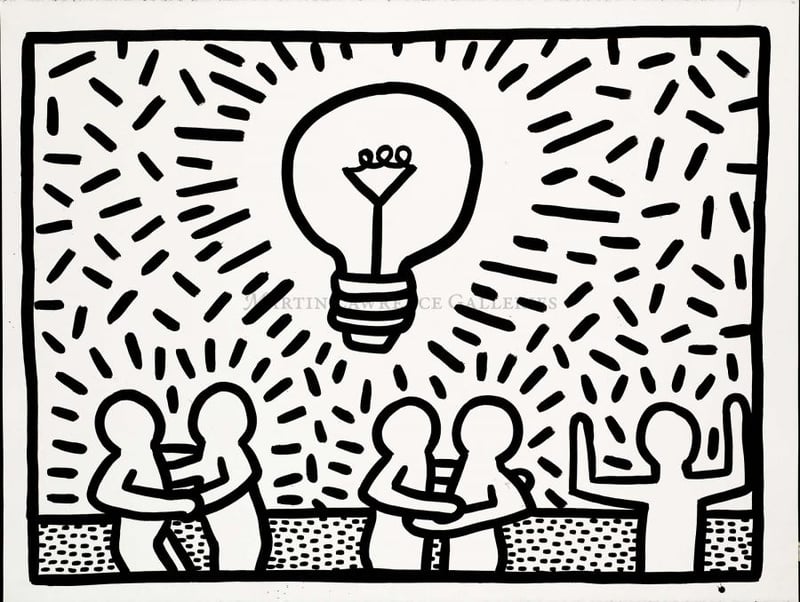 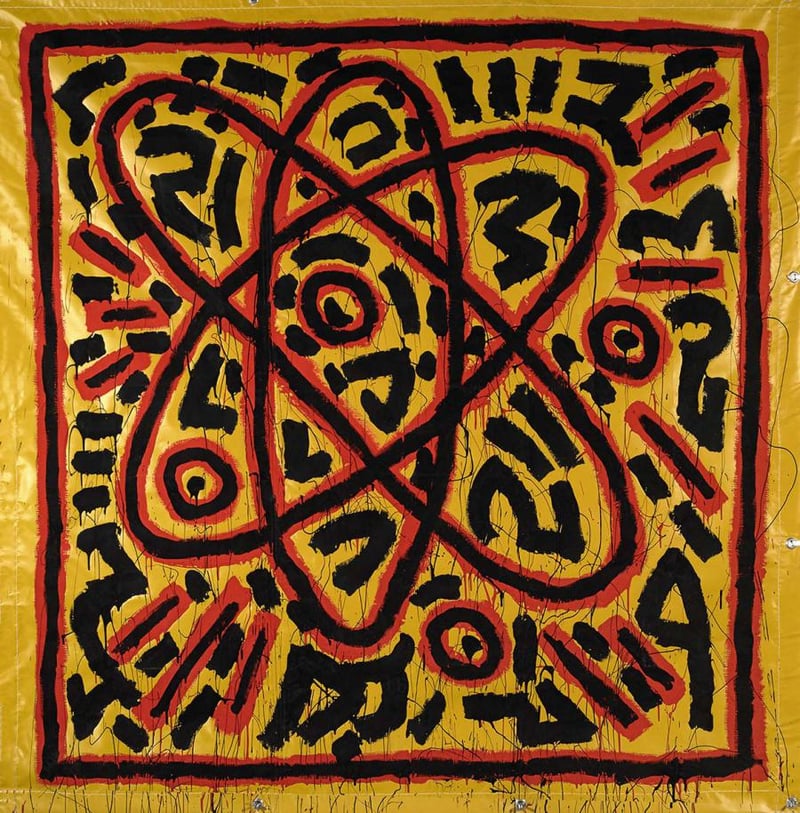 (MLG), the most prominent network of fine art galleries in the United States and a significant holder of Haring art, loaned several superb pieces.

My art is all that I have, and art is more important than life”
— Keith Haring
NEW YORK, NY, USA, December 5, 2019 /EINPresswire.com/ -- Keith Haring-friend and artistic companion to Andy Warhol and Jean-Michel Basquiat-was a unique figure in 1980s New York, playing a key counterculture role by creating his own unique and instantly recognizable style. Haring, known for his iconic motifs including barking dogs, crawling babies, and flying saucers, made His art "public" by displaying it in his Pop Shop, the media, or in actual subway stations and collective urban spaces. He drew inspiration from abstract expressionism, pop art, Japanese calligraphy, and the work of New York graffiti artists. His singular, seemingly spontaneous style embodied the energy of his time, from space travel to hip-hop and video games. His work is still relevant and influential today.

As a result, the BOZAR /Centre for Fine Arts and Museum Folkwang, in collaboration with the Tate, organized an exhibition of his most famous works. And, to ensure it is complete, they turned to (MLG), the most prominent network of fine art galleries in the United States and a significant holder of Haring art, for several superb pieces.

Haring was the consummate people pleaser; he loved interacting with those from all walks of life. His open-door policy filled his studio with swarms of people moving in and out at all hours. Being able to communicate was extremely important to him, and as a result, the development of his easily identifiable hieroglyphic vocabulary followed naturally and became his most important artistic achievement.

As a gay man and artist, living with the constraints and prejudices of the hetero-dominant society around him at the time, Haring worked to eliminate the distinction between black and white, heterosexual and homosexual, human and animal, natural and artificial. As such, he became an icon, working tirelessly to bridge divisions both through his artwork and through his work in various social justice movements involving racism, homophobia, AIDS, nuclear proliferation and other environmental issues, income inequality, children, capitalism/consumerism and oppressive authority in general.

MLG's Haring work' Untitled, 1981, (Light Bulb) was selected as the exhibition poster and prominent in all exhibition promotional materials, Haring depicts gender-fluid couples embracing, under a light bulb. Although many of Haring's symbols were readily decipherable, their true meaning was sometimes left open for interpretation, providing a 'story' with no beginning or end. For instance, the dots/spots on his figures sometimes signify 'otherness' and explicitly 'queer' in some cases. In this image, Haring has placed the dots on the foreground, possibly signing 'queer space' for these dancing couples. Combined with the bright light of the bulb hanging over them and the dynamic short lines of sound energy, the suggestion is that this is a dance club space where 'others' are open to being themselves-reveling in it-and doing so in the bright light of freedom.

The three-eyed smiling face in Untitled, 1982 (smiley face in 2-headed man), ink on paper-another loan from MLG-is thought to represent either greed or joy in Haring's work. It was a motif that Haring returned to often and served as the catalog cover for his first one-person exhibition in 1982 at Tony Shafrazi's New York gallery. Togetherness or partnership as a means to joy is suggested by the twinned figure and excitement/movement lines. Also, in 1982, this twinned figure with the smiling face appears on a baby crib that Haring designed, and with that context strongly suggests that this iteration of the smiling face was one of joy, specifically the celebration of procreation.

"Untitled [Atomic Energy), 1982-the final MLG lent artwork-is a rare image of the atomic symbol in Haring's much-desired large tarp medium. Many of the works from this period rendered in red and black on yellow tarp resulting in an intense vibrancy. Untitled also projects a visceral quality not always present in Haring's painting — the image feels quickly painted with the rough outlines and dripping paint conveying urgency to the work, like a graffiti crafted on the run.

In June of 1982, Haring attended the massive anti-nuke and disarmament rally in New York City, which protested nuclear arms and aimed to draw full attention to the UN Second Special Session on Disarmament taking place that week. He created an offset lithograph for the rally in April, published it himself, and gave 20,000 of them away that day. That image is a 2-panel image in which the above atomic symbol appears in the lower center of the image.

Effervescing with dynamic and electric energy, Keith Haring's large-scale painting Untitled plunges the viewer into a vibrant world of color, chaos, and irresistible charm. The composition rendered in eye-catching hues of yellow and red that interspersed with Haring's signature lexicon of bold, black ciphers and symbols. There is something enticingly visceral about this work: the raw immediacy of the primary palette combined with the simple articulation of shape and form exude an explosive vitality. Executed in 1982, Haring's highly charged composition seems to encapsulate the combustible energy of the 1980s New York City, which was thriving with the excitement of sexual liberation, gay culture, and a plethora of artists and intellectuals.

The central motif of Haring's Untitled (Atomic Energy) a broad delineation of the atom symbol evokes themes of regeneration and rebirth: colorful stripes, lines, and contours fly slapdash across the canvas as if in emulation of the magnitude of the cosmos or the big bang theory itself. Epitomizing the youthfulness and spirit of both the artist and his contemporary moment, the painting brims with a sense of creation, existence, and exploration, all fixed within a pulsating surface. In his complex network of codes, motifs, and signifiers, Haring sought a global language: 'a more holistic and basic idea of wanting to incorporate [art] into every part of life, less as an egotistical exercise and more natural somehow.