The Israeli duo is globally famous, with over 15 million fans and more than a billion views! 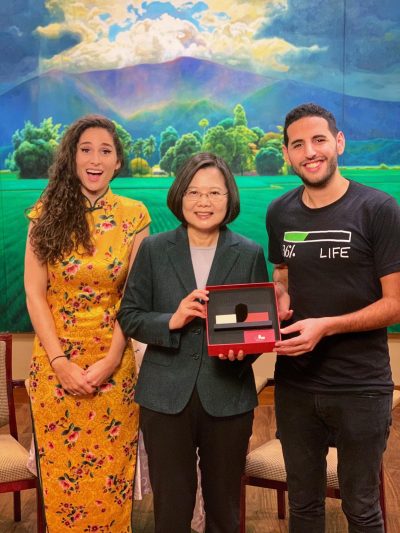 After spending the night at the Presidential Office, Nuseir Yassin and Alyne Tamir, the video blogging couple best known for their online video channels, Nas Daily and Dear Alyne, met with Tsai Ing-wen, the President of Taiwan. President Tsai will feature in an upcoming Nas Daily video and in Dear Alyne’s podcast as together with the influential couple they raise Taiwan’s presence on the world stage. While in Taiwan, Nuseir and Alyne will also be making several other videos, such as the story of Taichung’s Rainbow village, and how you can spend US$100 on a date in Taiwan.

The Israeli duo is globally famous, with over 15 million fans and more than a billion views! Nas Daily became a popular channel when Nuseir focused his efforts on creating 1-minute videos every single day for 1,000 days and since then, Nuseir has continued to create great short-form videos about important topics and interesting people. Dear Alyne is a set of channels focused on telling stories that make the world a better place, and in particular highlights issues like female empowerment, eating better, environmental sustainability and care for animals. You can find Nas Daily on Facebook at facebook.com/NasDaily and Dear Alyne at facebook.com/DearAlyne

For the past few years, Taiwan has been winning market share and is increasingly popular among Israeli travelers. The Taiwan Tourism Bureau has focused on growing awareness and interest in Taiwan as a tourist destination in Israel by bringing top tier influencers to Taiwan.

Through understanding the type of content influencers want to make, Taiwan Tourism Bureau aims to facilitate experiences that empower invited influencers to make great content that shows Taiwan in a positive light and inspires more tourists to visit.

The Taiwan Tourism Bureau (TTB) is the official government agency of Taiwan (R.O.C.) responsible for domestic and international tourism policy development and execution. The Israel market is managed by the Singapore branch of TTB.

The marketing slogans currently in use for Taiwan, are “Time for Taiwan” and “The Heart of Asia”, while the official mascot of the TTB is OhBear, a cartoon Formosan Black Bear, the national animal of Taiwan.