Nero Fiddles While Rome Burns, Part I - TulsaCW.com: TV To Talk About | The Tulsa CW

Why are there so many bad executives and what makes an executive really bad? Investors know that poor management decisions sink an entire organization. The business graveyard is filled with organizations that reacted too slowly to change or did not react at all. For example, Motorola Mobility (Lenovo) and LG Electronics watching smart phones erode the entire cell phone market. JC Penney , Sears, (ESL Investments), The Gap and Old Navy (part of The Gap) tied to brick and mortar while new online competitors grabbed their business taking smaller margins. Apollo Education Group, the education giant and parent of University of Phoenix, thought it was a hedge fund like its parent Apollo Management and placed money above education. All of these poorly led organizations are on the way out.

These once thriving organizations employ smart, alert managers thwarted by bad CEOs and Boards. The stimulus for this series is the crowd of experts weighing in on “toxic management.” The Internet sags under the weight of seminar announcements. These well-meaning lectures concentrate on annoying personalities without identifying how they damage the organization.

The Myth Buster has worked for or with some of the most irritating managers imaginable and enjoys uncovering their terrible personal traits. The Wall Street Journal ran stories on such people years ago but stopped. Too bad! In this series, we will reveal the three most crippling management traits. Our purpose is to instruct and to have some fun. The fun came at the Myth Buster’s personal expense, but he hopes you take pleasure in reading about these miscreants.

One organization the Myth Buster worked with years ago featured a group of unstable board members. You have probably run into a dirty dozen or two at meetings where yelling, cursing and table pounding reign supreme. The distinguished Board members in this not-for-profit -- which proclaimed itself for the public good -- included Johnnie Walker, Jim Beam, Glen Livet, Bud Weiser, Jose Cuervo and Captain Morgan (honorary title). Meetings began slowly, heated up as the imbibing third round of doubles! -- took off and led to bizarre statements and opinions. These prominent citizens actually advocated paying bribes to city officials, reaching into the deep pockets of Wall Street firms with phony claims and a few ideas that could not be printed here. The noise level rose after these daytime corporate executives reached their heights, or, more accurately, got high.

As promised, the focus of this series should be on damaging management traits rather than disgusting personal habits. This three-part series looks at the most destructive management traits in ascending order. Our July entry takes on the third worst flaw of miserable executives. Keep reading. In two months, the very worst element will be revealed.

Number three on the list is laziness, or sloth for the morally minded. As amazing as it sounds, a sizeable subset of senior managers do not work very hard. The immediate reaction when managers hear this is, “How did they rise to the top of their organization?” To rise to a senior position, they are almost invariably smart, smarter than those around them. Their smartness comes from a quickness of mind. They see things right away and speak up at meetings. But laziness is an all-encompassing bad quality. When the going gets tough, the slothful manager does not roll up his or her sleeves and grapple with the problem. He or she merely delegates. Spoiled by years of working in environments where executives get answers from others and can order expensive inside and outside resources to generate and evaluate numbers and project cash flows and market demand, these managers never take a direct personal role in solving the big problems. They never get results.

What's Good for the Country is Good for General Motors???

A major historical example is Roger Smith who was Chairman of mighty General Motors from 1981 to 1990. Smart, executive looking, he was surrounded by personally chosen boot lickers, many with MBAs. During his time, Japanese auto makers especially Honda and Toyota grew rapidly in the enormous US market, built a reputation for quality and derived maximum benefit from employees through quality circles. While other companies began to employ these newer management techniques, Smith and his associates explained away erosion of their market or blamed it on the union or commissioned expensive reports to show that they were really on the right track. From 1981 to 1990, GM market share dropped 8%. 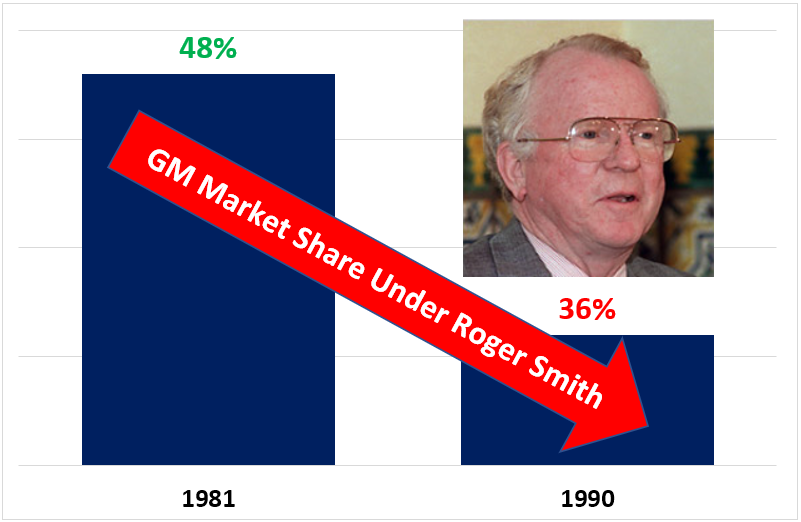 While investors may agree that Smith was unimpressive, they may think his approach to management was uncommon. The Myth Buster ran into an executive who said he could read reports but he could not write them. These “reports” detailed the quality of the product and the profitability of the organization. Another company president waited until the deadline and forced others to work through the night to complete a project that was sitting on her desk for months. Her personal qualities were well known and she has been fired or moved to different locations eight times. Despite the terrible track record, like the proverbial bad penny, she keeps returning. Foolhardy, alcohol-soaked Board members who seek personal esteem by being named to Boards empower these smart, attractive, but lazy executives at least until the bottom falls in.

The Myth Buster received a call from a manager on another floor that government representatives were on their way to visit headquarters. This meant trouble! We immediately called the company president who told us he could not come because he was having a massage.He was literally laying down on the job.

The title of this series is taken from the well-known saying about Roman Emperor Nero. While our first bad quality laziness is really bad, just wait for parts 2 and 3.