Thunder Can Improve in Standings Over Next Five Games - TulsaCW.com: TV To Talk About | The Tulsa CW

Thunder Can Improve in Standings Over Next Five Games

As we inch deeper and deeper into the 2019 NBA season, the Oklahoma City Thunder are finding their groove in the middle of the Western Conference. As of Wednesday, December 10th, they are riding a three-game win streak and looking to climb their way up from the 7th place spot to overcome the Utah Jazz and try and put some distance between themselves and the Phoenix Suns, Sacramento Kings, and Minnesota Timberwolves.

Speaking of the Sacramento Kings, the Oklahoma City Thunder have them up next on Wednesday night. They have a fairly easy schedule over the next week or so, with the Denver Nuggets, on December 14th being the only good team before they play the Los Angeles Clippers on the 22nd. So, we’ll face the Kings, Nuggets, Bulls, Grizzlies, and Suns before taking on the Clips at home.

When we look at the teams, according to SBR standings only the Nuggets have a prayer of making it through the playoffs this season. Right now, the Kings are the Chicago Bulls are back at 11th in the Eastern Conference and the Memphis Grizzlies are way back at No. 13 in the Western Conference. The Sacramento Kings are trying to stay on par with the Thunder and are currently in 8th overall, and the Phoenix Suns are on the bubble at No. 9 in the west.

Denver is the only real threat over the next five games. We can’t expect the Thunder to win all four of the games outside of the chance that they lose to the Nuggets, but it is a definite possibility. Then after the Clippers, they face another soft stretch with Memphis again and the Charlotte Hornets before getting a rough, three-game stretch where they face the Toronto Raptors, Dallas Mavericks, and San Antonio Spurs all back to back. 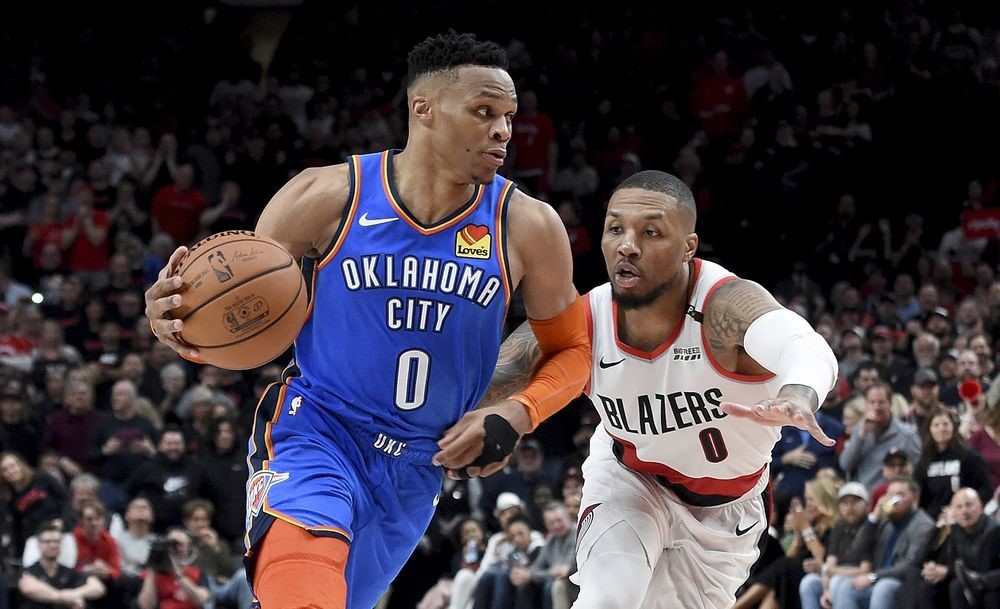 But before that happens, the Thunder gets a definitive opportunity to climb the NBA standings a bit. They could, by all means, go 6-2 over the next eight games and improve their record to a winning one of 17-14 by the time those games play out. They have a good chance at catching the Jazz if this happens, but it won’t be easy because Utah also has a pretty soft stretch coming up. The Jazz will face the Minnesota Timberwolves, Golden State Warriors, Orlando Magic, Atlanta Hawks, and Charlotte Hornets, before meeting a good team in the Miami Heat.

But the Thunder have something going for them. They are starting to gel. Not only do they have a three-win streak going, but they have won two on the road in tough environments. The Blazers are struggling right now, but anytime you can go into Portland and get a win inside the Moda Center it’s a good thing. And the most recent win, a head-to-head against the No. 6 seeded Jazz shows that the Thunder are starting to heat up and flash.

But it alls starts or in someways ends with the final leg of their three-game road trip. If they can get a win in Sacramento they will sweep their current road trip, also go four straight and put one step more between themselves and that No. 8 squad. But Vegas is giving the Kings a little edge at home. They seem to think that Sacramento is two points better at Golden 1 Center on Wednesday. So, the Kings are listed as a slight favorite. It does make a bit of sense, the Kings have won two straight and are at home. And they teams they beat were upper-echelon competition in the Rockets and Mavericks. That said, OKC has some momentum and definitely a winnable game.

If the Thunder get a win on Wednesday night, look for them to win a handful of their next five and start to secure a foothold above the playoff relegation line.