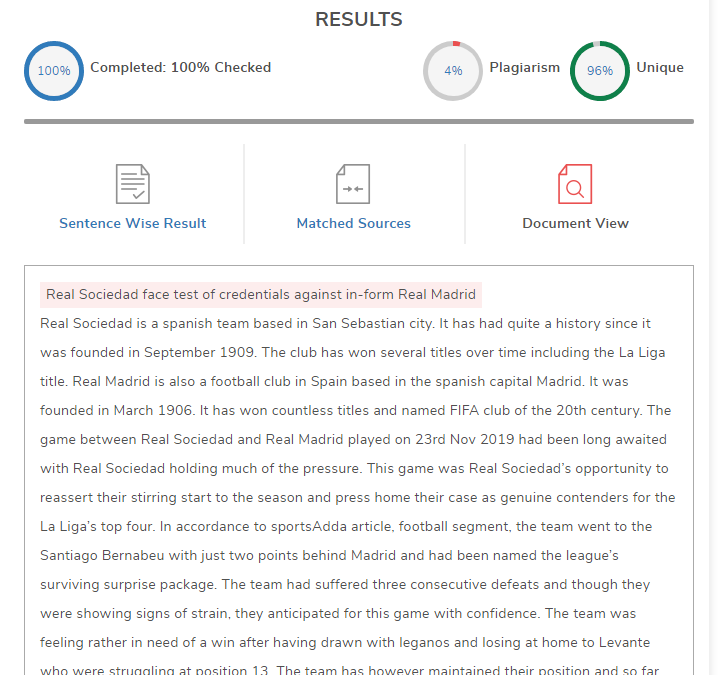 Real Sociedad is a Spanish team based in San Sebastian city. It has had quite a history since it was founded in September 1909. The club has won several titles over time including the La Liga title. Real Madrid is also a football club in Spain based in the Spanish capital Madrid. It was founded in March 1906. It has won countless titles and named the FIFA club of the 20th century.

The game between Real Sociedad and Real Madrid played on 23rd Nov 2019 had been long-awaited with Real Sociedad holding much of the pressure. This game was Real Sociedad’s opportunity to reassert their stirring start to the season and press home their case as genuine contenders for La Liga’s top four. In accordance with SportsAdda article, football segment, the team went to the Santiago Bernabeu with just two points behind Madrid and had been named the league’s surviving surprise package.

The team had suffered three consecutive defeats and though they were showing signs of strain, they anticipated this game with confidence. The team was feeling rather in need of a win after having drawn and losing at home to Levante who were struggling at position 13. The team has however maintained their position and so far been quite fluid and entertaining to watch. They have intimidated their opponents with their swift pace and intensity.

Real Madrid was going to this game very confident as they had played their previous five games without conceding a single goal and winning four of those with a total of 16 goals. Madrid was also anticipating the return of Gareth Bale who had not played for the team for some weeks and still awaited to see how Madrid fans would receive his celebration for his national team, Wales qualifications game in Cardiff.

The much-anticipated match came without fail and Real Sociedad moment to face the test of credentials had arrived. Their pressure led to a goal in the second minute of the game when William Jose poached a poorly executed back pass by Sergio Ramos meant for the goalkeeper Thibaut Courtois turning it into a clean goal. The first half was dominated by Sociedad with their midfielders Merino, Oyarzabal, and Martin took an initiative with great passing attacks that kept Madrid on their toes. Madrid weathered the domination of the first half by Sociedad until Benzema chested a corner by Modric to equalize the score in the 37th minute.

Martin Odegaard who was drawing quite the attention to himself as an impressive and creative midfielder was in Real Sociedad on loan from Madrid and would be meeting his parent team for the first time. He played with tact his passes posing quite a challenge for Madrid. Zidane gave him quite a thumbs up after the game.

“He looks good to me. He played well today and since the start of the season,” Zidane said of Odegaard. “He brings something technically to his team. He’s a Real Sociedad player right now.”

The second half was looking more promising to Madrid with Federico Valverde’s deflated shot putting them on the lead two minutes in. The game was tough and the two teams displayed great tact until Madrid’s third goal that came from Modric and highly assisted by Gareth Bale. Bale was booed by fans when he came in as a substitute but this did not hinder him from showcasing his great skills and worth for his team when he set up the path for their winning goal. Although the fans jeered at him loudly every time he had the ball, they applauded his great performance after Modric’s goal.

Real Madrid was pushed to the second position after this amazing match while real Sociedad was left in Fifth place and five points behind Real Madrid.