Uninsured and High-Risk: States with the most Uninsured Motorist - TulsaCW.com: TV To Talk About | The Tulsa CW

Uninsured and High-Risk: States with the most Uninsured Motorists

Across the United States, it’s illegal to drive without car insurance. Yet, some car owners choose to do so despite the risks.

The consequences of driving without insurance can be severe. Penalties for driving without insurance vary by state, and fines range widely, from $30 to $5,000. On average, though, states fine drivers between $400 and $1,000 for the first offense. On top of fines, offenders risk license suspension, plate confiscation, possible jail time for up to 1 year, and possible community service time. Some states may even impound an uninsured driver’s car. Many uninsured drivers are assigned to their state’s ‘high-risk’ pool, and their insurance premiums spike as a consequence. In fact, there are over 50 reasons why you should never drive without car insurance, yet drivers across the country continue to do so at shocking rates.

What’s more, the legal consequences of driving without insurance may pale in comparison to the financial implications of being at-fault in an accident without auto insurance. At-fault drivers without car insurance may be forced to pay out of pocket for thousands of dollars in damages and medical bills.

People drive without auto insurance for a variety of reasons. Some drivers may forget to renew their policy, while others make the conscious decision to drive uninsured. For some who live hand to mouth, the cost of auto insurance can be prohibitive. Those whose livelihood depends on their ability to drive to work each day may choose to take the risk of driving without auto insurance to make ends meet.

Other drivers are overconfident in their ability to drive without getting into an accident. As a consequence, they make the risky (and illegal) decision not to purchase car insurance under the premise that it is unnecessary. For a detailed explanation of why some drivers choose to drive without the protection of auto insurance, here are five reasons drivers don’t buy a car insurance policy. 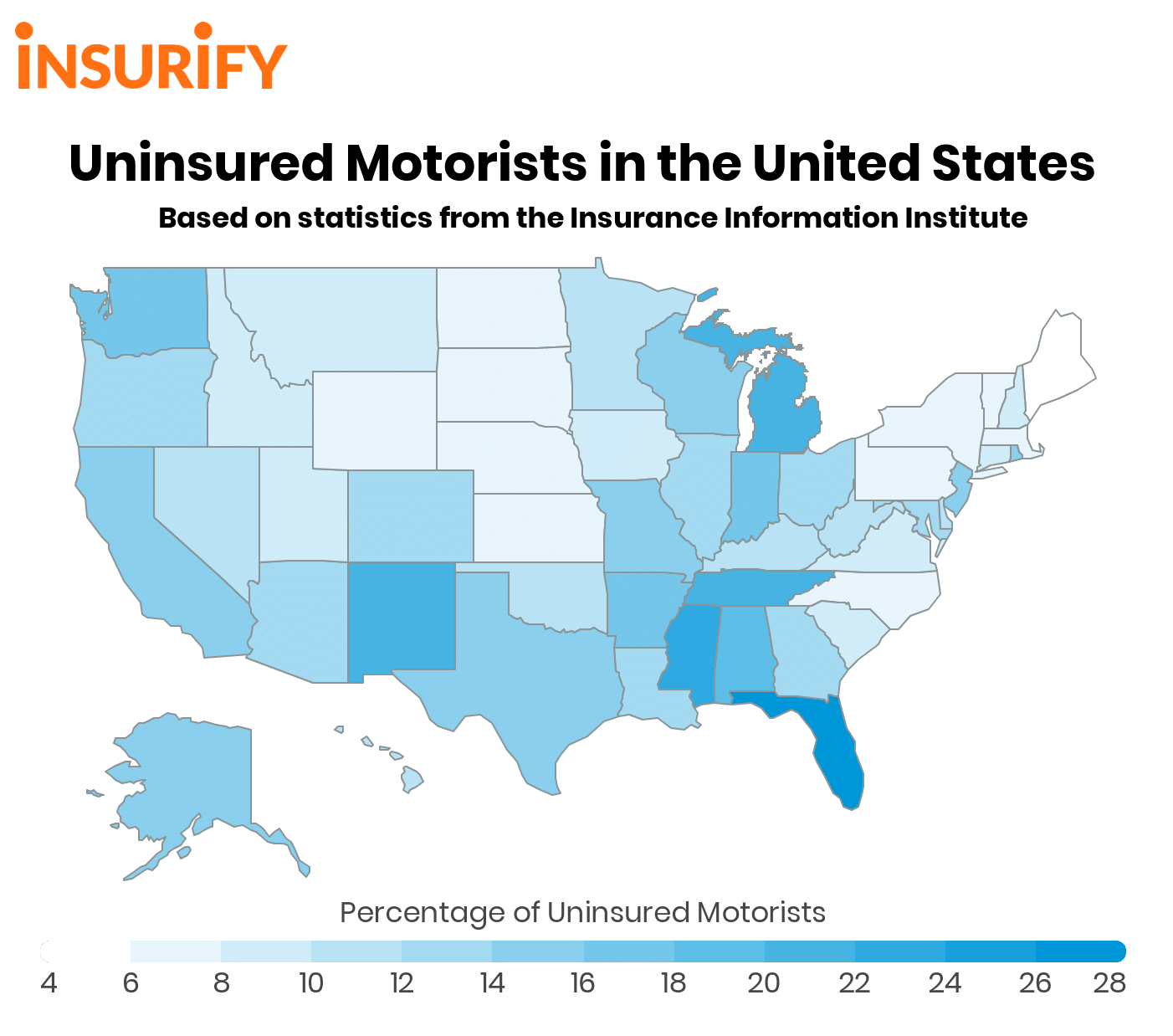 Insurify’s data scientists were curious to identify other factors related to rates of uninsured drivers by state. Given how costly insurance premiums can be (the average household spends well over $1,200 per year on auto insurance), they hypothesized that income is related to the percentage of drivers who purchase auto insurance.

To determine whether the percentage of uninsured motorists in each state is related to that state’s median household income, Insurify’s data scientists calculated the correlation between the two. 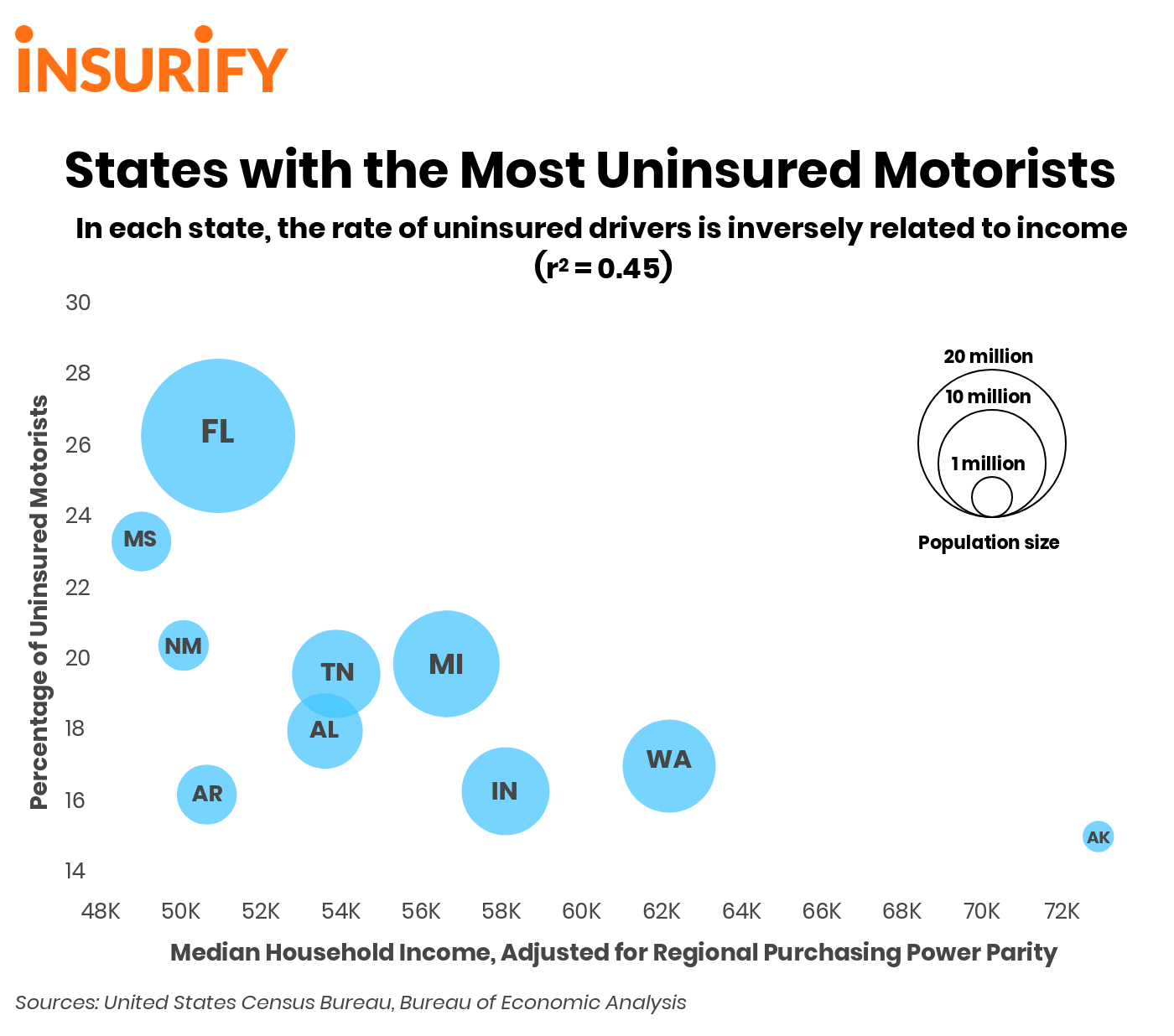 Alaska has its fair share of uninsured motorists. This statistic may come as a surprise, given that legal consequences for driving uninsured in Alaska are hefty and the adjusted median household income is more than twenty-two percent higher than average. For first infractions, fines range from $500$1,000 for the first infraction. Additional punishment can include license suspension and up to ninety days in jail.

Even though driving without insurance in the state of Arkansas can cost a pretty penny, one out of every six drivers is guilty of this offense. First-time offenders in this state face license suspension and a fine of up to $500 for driving without auto insurance. For a second offense, fines climb as high as $1,000.

Penalties for driving uninsured in Indiana are hefty, yet many drive in the Hoosier State without the protection of auto insurance. For first infractions, fines can reach $1,000, and violators face license suspension and a required SR-22 for 3 years. Luckily, Indiana drivers tend to be safer than average, at least when it comes to respecting pedestrian yield laws: Indiana is one of the least dangerous states for pedestrians.

Washington State has 40% more uninsured drivers than the national average, despite the consequences of driving without insurance. In this state, first-time offenders face license suspension and fines reaching $250. Washington also ranks #7 for the most reckless drivers in America. When it comes to driving-related offenses, The Evergreen State tends not to be the worst, but it certainly isn’t the best.

Anyone driving without insurance in Alabama faces stiff penalties in addition to the cost of damages and medical bills if found at-fault in an accident. Fines are as high as $500 for first-time offenders, who also risk registration suspension for up to 45 days.

A whopping one in five drivers in Tennessee are uninsured. First-time offenders face license and registration suspension, but fines for driving uninsured in Tennessee are not particularly high. First offenders pay from $25 to $300 in fines, which are lower than fines for this infraction in most other states. For comparison, a ticket for driving under the influence (DUI) in Tennessee can leave a driver short $350 to $1,000. Tennessee drivers take note: uninsured motorist coverage is not required, but with sky-high numbers of uninsured drivers on the roads, it’s wise to protect yourself against uninsured drivers in the event of an accident.

Of the top ten states with the most uninsured drivers, Michigan is the only state for which the legal consequences of driving without car insurance involve the possibility of jail time. Additional penalties include license suspension and fines ranging from $200$500. As with Tennessee, uninsured motorist coverage is not required in Michigan. With such high rates of uninsured motorists, it could be a good idea to look into adding uninsured motorist protection to your policy.

New Mexico brings us to the top three on this list, with more than one in five cars on the road without any insurance coverage whatsoever. Fines can reach $300 for first offenders, whose vehicle registration may be suspended and their plates confiscated.

Nearly a quarter of motorists in The Magnolia State drive without insurance, placing this state as second in the nation for states with the highest proportion of uninsured drivers. These incautious drivers risk $500 worth of fines and license suspension, not to mention paying out-of-pocket for damages and medical bills if found at-fault in an accident.

Florida has the highest percentage of uninsured drivers out of any other state in the nation, with over one in four drivers operating a vehicle without insurance. Drivers in Florida face lesser fines for this infraction than drivers in other states, with fines at $150 for the first infraction. Other consequences of driving without insurance in Florida are an SR-22 for up to 3 years, registration suspension, license suspension, and confiscated plates.