HOLLYWOOD, Calif., Jan. 14, 2020 /PRNewswire/ -- Turner Classic Movies (TCM) today announced that the third annual Robert Osborne Award, recognizing an individual who has helped keep the cultural heritage of classic film alive for future generations, will be presented to one of the world's most respected film critics and historians, Leonard Maltin. He will receive the award at the 2020 TCM Classic Film Festival during a screening of a nitrate print, provided by the UCLA Film and Television Archive, of one of his favorite films, Counsellor at Law (1933). The first two Robert Osborne Awards were given out in 2018 to iconic filmmaker Martin Scorsese and in 2019 to film preservationist Kevin Brownlow and will continue to be presented annually at the TCM Classic Film Festival. 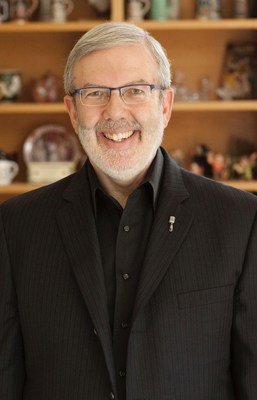 Best known for his widely-used reference work Leonard Maltin's Movie Guide and its companion volume Leonard Maltin's Classic Movie Guide, as well as his 30-year run on television's Entertainment Tonight, Maltin served two terms as President of the Los Angeles Film Critics Association, is a voting member of the National Film Registry and was appointed by the Librarian of Congress to sit on the Board of Directors of the National Film Preservation Foundation. He teaches at the USC School of Cinematic Arts, appears regularly on TCM and hosts the weekly podcast "Maltin on Movies" with his daughter Jessie. He is the recipient of awards from the Los Angeles Film Critics Association, American Society of Cinematographers, the Telluride Film Festival, George Eastman House, Anthology Film Archives and San Diego's Comic-Con International.

"For movie fans of a certain age - let's say between 30 and 130 - Leonard Maltin has been an indispensable source of vital information: 'What was it called? When was it made? Who was in it? And was it any good?' Consistently, you'd find the answers in Leonard's books. They set the standard for movie reference," said Ben Mankiewicz, TCM Primetime Anchor and Official Host of the TCM Classic Film Festival. "Leonard's knowledge and passion for the movies has spanned an entire history of cinema. Who was the greatest silent screen comedian? Leonard has an answer because he's seen those pictures. Was 1939 really Hollywood's greatest year? Ask Leonard. How does Once Upon A Time in Hollywood stack up against The Irishman and should Moonlight's Oscar® win over La La Land be considered an upset? Once again, ask Leonard Maltin. If Leonard doesn't deserve the Robert Osborne Award, no one does. He's made movie knowledge accessible to millions of film fans across the globe."

"Leonard Maltin has been a friend to TCM for many years, and his work to make sure classic film history is accessible to everyone is a cornerstone of what TCM represents," said Charles Tabesh, senior vice president of programming, TCM. "We have relied on Leonard's extensive film knowledge on air and at every TCM Film Festival in the past, and we are thrilled to be able to honor him with the Robert Osborne Award."

For more than 22 years, Robert Osborne served as the primetime host and anchor of TCM, helping millions of viewers discover and enter the world of classic movies, and dedicating his life to preserving and sharing the movies he loved. Embraced by fans around the globe as both a fellow movie lover and an unparalleled film historian, his legacy of devotion to classic films and their ability to inspire will live on through the Robert Osborne Award.

About the 2020 TCM Classic Film Festival

For the 11th consecutive year, thousands of movie lovers from around the globe will descend upon Hollywood for the TCM Classic Film Festival. The 2020 festival is set to take place Thursday, April 16 – Sunday, April 19, 2020. Over four packed days and nights, attendees will be treated to an extensive lineup of great movies, appearances by legendary stars and filmmakers, fascinating presentations and panel discussions, special events and more.

TCM Primetime host Ben Mankiewicz will serve as official host of the TCM Classic Film Festival. The festival's official hotel and central gathering point for the 11th consecutive year will be The Hollywood Roosevelt Hotel, which has a longstanding role in movie history and was the site of the first Academy Awards® ceremony. The Hollywood Roosevelt Hotel will also offer special rates for festival attendees. Screenings and events during the festival will be held at the TCL Chinese Theatre IMAX, the TCL Chinese 6 Theatres, the Egyptian Theatre and the Legion Theater at Hollywood Post 43, as well as other Hollywood venues. For the latest news and information, follow us on social at #TCMFF.

This year's theme is "Grand Illusions: Fantastic Worlds on Film," which will take fans on a journey to enchanted worlds of fantasy and stories beyond belief. From myths and magical creatures to ghostly encounters and travels through time, they will escape with fellow movie lovers to places that will ignite their imagination.